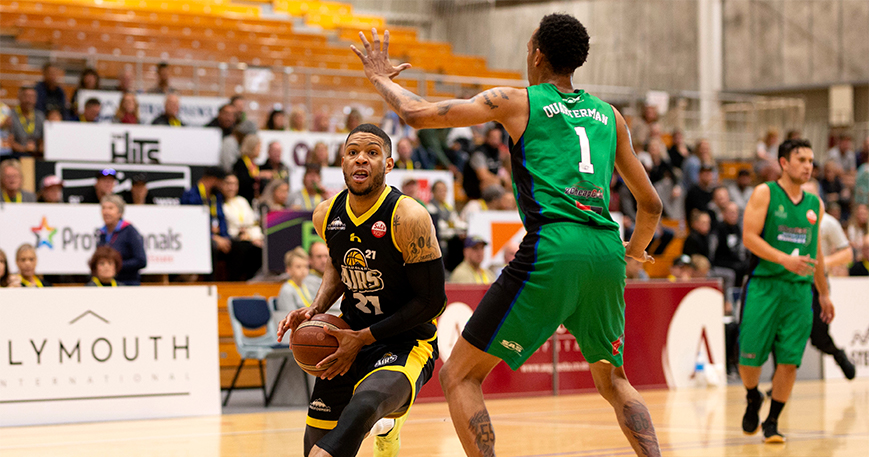 A hot start for the Rangers saw them shoot off to a 9-3 lead in the opening minutes, with Tim Quarterman scoring seven of those points from in the paint and at the line. Alonzo Burton and Derone Raukawa got on the board following a timeout from Head Coach Dave Bublitz and pushed their team back in front in the closing moments of the period. The Airs led 26-18 going into the second.

Bench players Xavier Shaw and Dane Brooks were a telling force for the Airs in the second quarter, scoring points in various fashions while also holding it down on the defensive end. Quarterman continued to cause headaches for the host's backcourt, but he seemed to be doing it all on his own as his teammates couldn't convert on open looks. Their failure to knock down shots and lapses at the other end of the floor resulted in the Airs leading 50-32 at the half.

The Rangers showed greater focus at the start of the second half and went on a 7-0 run. The three-minute dry spell for the Airs was shaken when Brooks got inside for another lay-in, giving his team the boost they needed to stifle the visitors momentum. A Raukawa jump shot with less than 10 seconds remaining was the last of the scoring in the period and the Airs took a 68-55 lead going into the fourth.

Nothing was done to alter the Airs buffer in the last period, with the Rangers unable to string together enough stops to get the game close. For every bucket Quarterman made, Raukawa and co would answer the call. The Airs finally put together a 48 -minute performance and will hope to build on this win going into the second half of the season.

Raukawa was the Sal's MVP with 23 points and 7 rebounds, but just as lively was sixth man Brooks with the same amount points but four boards.

Tim Quarterman showed out for the third week in a row, dropping 31 points, 9 rebounds and 7 steals. Captain Venky Jois chipped in with 13, 12 and 6.

Stats That Matter - Once again the Rangers were soundly beaten on the board, the Airs winning the count 53-37. Off the bench the Airs also won the battle 39-11, a result that went a long way to the home team cleaning their first win of the season.