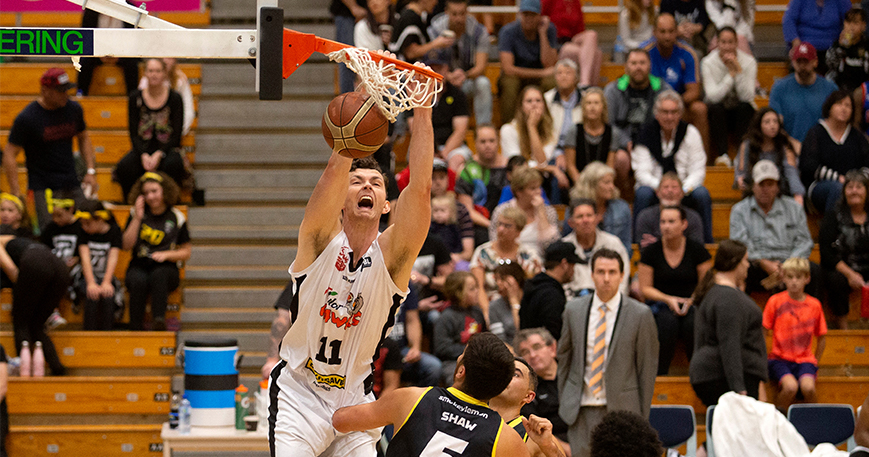 The hosts were without backcourt duo Derone Raukawa and Dane Brooks for this Sunday's afternoon clash but got were the better team out of the blocks in the first period. Alonzo Burton scored eight of his team's first 10 points to see the Airs up 10-2 after three minutes of play. This would change shortly after Burton's third field goal, with the Hawks going on a 22-3 run and finishing the quarter 27-17 in front.

The Hawks would continue to pour on the points in the second, with Jarrod Kenny nailing an early three before Angus Brandt threw down a crowd-silencing alley-oop. Imports EJ Singler and Shaquille Thomas chimed in multiple baskets, while in-form marksmen, Ethan Rusbatch, continued to make teams pay for leaving him open that split second. Kevin Foster and Houston O'Riley were the only players from the home team to score in the quarter and this saw the Airs down 54-37 at the half.

The third quarter was the lowest scoring part of the game and was a very scrappy 10 minutes. Both teams converted less than half their shot attempts, leaving the Hawks with a similar buffer to what they had put together in the first half. The lead would bounce between 13 and 20, but a 50/50 trip to the line by Ethan Rusbatch gave the visitors a 19-point advantage going into the final period.

It seemed unlikely the Airs could mount a last ditch effort to get their first win in the 2019 Sal's NBL, but the hosts refused to lay down and roll over. Kevin Foster had shouldered the bulk of the scoring load for the Naki men and used his rhythm to nail a big three with six and a half minutes to go. The Airs would then go on an 18-3 run over the next four minutes and see the scores read 85-81 with just over two on the clock. However, Thomas would lay the ball in on the ensuing possession and then have Rusbatch get the stop and go on to hit a huge trey to take the lead back to nine. Foster would answer back with his own three-point play, but his team would, like they had all night, would have no answer for Brandt inside and see his two-point basket dash any hope of a home victory.

Standouts from this afternoon's game for the Airs were Kevin Foster and Houston O'Riley, both of whom played big minutes and gave their team a fighting chance down the stretch. Foster finished with 37 points and O'Riley managed 15 whilst also chipping in six rebounds and five assists. Head Coach David Bublitz will be proud of the fight his team showed to claw their way back to within four but will be disappointed in seeing only seven points come from the pine.

Sal's MVP would go to big man Angus Brandt, who in his first match in the 2019 NZNBL would notch a double-double with 18 points and 12 boards. The forward has come in to replace the injured Daniel Kickert and looks like a force to reckoned with on block and under the hoop. Honourable mentions for the visitors were EJ Singler and Ethan Rusbatch, who continued their sublime form in the Sal's NBL and scored a combined 46 points.