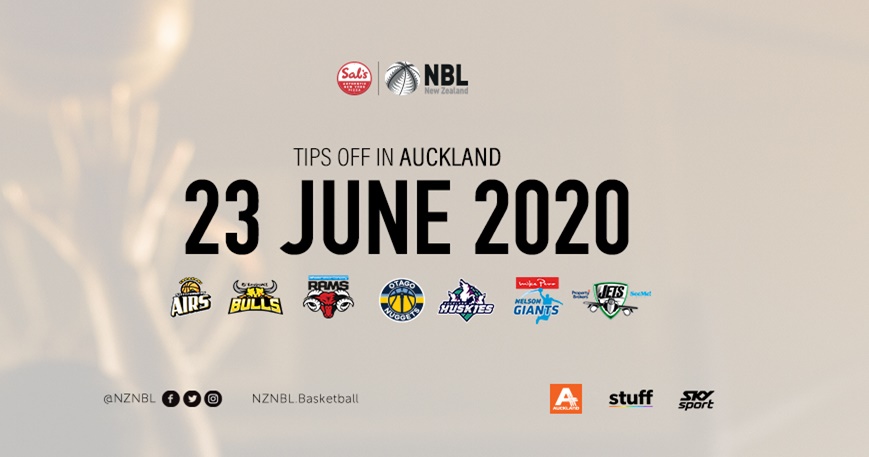 The Sal’s NBL will tip off in Auckland on 23 June, featuring seven teams that will compete for the 2020 Championship, fully broadcast by Sky Sport.

The Auckland Huskies, Canterbury Rams, Franklin Bulls, Manawatu Jets, Nelson Giants, Otago Nuggets and Taranaki Mountainairs will play up to three games per week, over six weeks. All teams will be based in Auckland, with the venue to be announced in due course.

Auckland Tourism Events and Economic Development’s (ATEED) Head of Major Events, Richard Clarke, says hosting the revamped competition in Auckland provides a modest but timely boost to the local events sector, as well as an opportunity to promote the region domestically.

“We are thrilled to be associated with this event. Sports fans are hungry for live action and this is a great opportunity to deliver an exciting competition, not only domestically but also to some of our key international audiences. At the same time, it’s a chance for us to showcase Tāmaki Makaurau as a destination and a hub for innovative events,” says Clarke.

This competition comes at a time where much of New Zealand’s top basketball talent is in New Zealand. Tall Blacks Coach Pero Cameron says he knows the basketball community is eager to get back on court.

“I know some of the guys really want this - they want to get back to work. For the Tall Blacks coaching staff, it’s really valuable as we look for that emerging talent putting their hand up for the national squad,” says Cameron.

It’s possible that this event could be the Tall Blacks staff’s only chance to see players vying for Tall Blacks selection ahead of the next international FIBA window in November.

“There are young talented players who are back from US college who will be out to impress, plus we hope to see a number of current Tall Blacks in action as well. We will be watching with interest,” says Cameron.

One of those players is young Kiwi star Jack Salt. The former Virginia Cavaliers centre, who helped lead the college team to a 2019 NCAA Championship title, has inked his intentions to play with the Canterbury Rams.

“I’m excited to get back to playing the game I love. I’m grateful to be a part of a nation that has been diligent in its response to the virus. Because of that response, Kiwis have the opportunity to get back on court and compete.”

There’s no doubt 2020 has been a big test for everyone, including those in the sports sector. Chair of the NBL Board, Iain Potter, says the NBL management and teams have needed to think differently, and work together to create an exciting product for 2020.

“The teams have been willing to innovate to see the return of the Sal’s NBL, which is so important for all of basketball. It lifts the game’s presence in New Zealand tremendously, plus the League will see an international reach too. Young players will watch this and remember there is a pathway to the top in New Zealand, with Tall Blacks and US college stars on the floor.”

For the first time in its history, the NBL will also feature a player draft. General Manager Justin Nelson says this will add to a competitive show for the fans and is a way of spreading the talent.

“We knew it was imperative that we adapted, showed creativity and came up with something new and exciting. We believe, together with our teams and players, we have developed a format that will work well in the current environment.”

Nelson says a new world-first innovation will also be trialled to decide tied games with a unique ‘first-team-to-score-seven-points’ concept instead of the traditional overtime period.

“It’s likely this competition will be one of the few basketball leagues being played in the world at this time, that offers a big opportunity for an extended audience. It also presents us with a chance to try something new. We like to think of ourselves as innovators here in New Zealand and the ‘first-to-seven’ concept is a bit outside the square, which we think will be engaging for fans.”

Of those fans, Otago Nuggets followers will be especially excited. Notably, this is the first season the Nuggets have featured since 2014.

The League will make further announcements about the competition, including a full schedule, in the coming days.