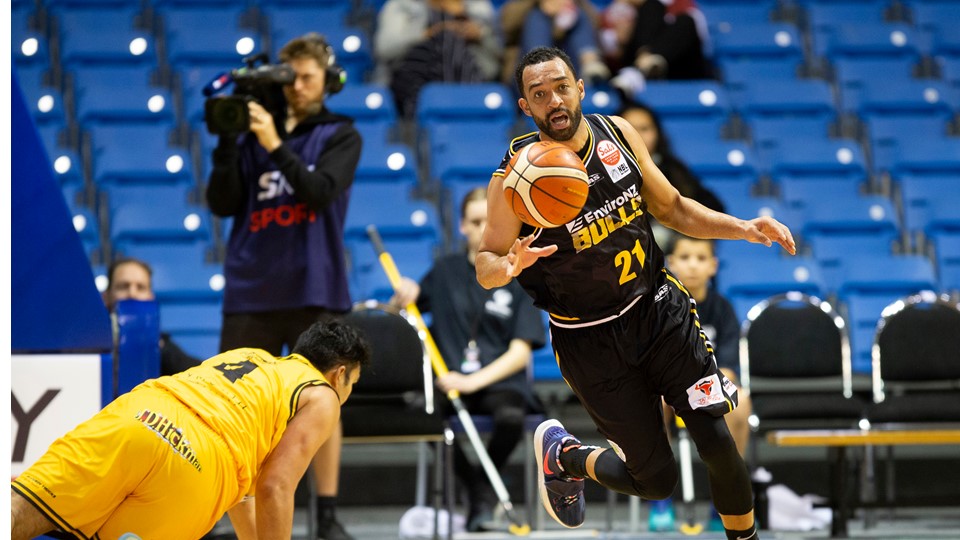 Bulls Trample Over The Listless Airs

The Franklin Bulls had done their homework, after two heavy Sal’s NBL defeats to the Airs in which the Taranaki side scored in excess of 100 points the Bulls put a plan in place to slow the Airs offence down and it worked a treat as the Bulls trampled all over the Airs in a 92-65 victory at Trusts Arena tonight.

The Bulls win was built on a sharp shooting display from veteran guard Everard Bartlett, the former Tall Black was deadly from deep in draining all five of his triples for a game leading 18 points. He received good support from Dom Kelman-Poto (16) and Isaac Davidson who returned to form with 17 points, albeit he still struggled from deep making one of four long range efforts. Sam Timmins was his usual industrious self, with 12 rebounds and 7 points in the paint and Nikau McCullough was a spark off the bench with a dozen points.

The signs were not good for the Airs in their final regular season hit out as it took them all of the first three and a half minutes to get on the board, with a Marcel Jones drive to the basket earning their first points of the game. It was to be a familiar pattern as the Bulls looked to take the ball out of Derone Raukawa’s hands at every opportunity, throwing the Airs out of their offensive rhythm to earn a massive 49-27 lead at the main break.

By contrast the Bulls were having no such issues in scoring, with no less than six players draining at least one triple in the first half. They were matching that accuracy at the hoop with effort in the paint, out rebounding Taranaki 25-16 at the break, continuing a real area of concern for the Airs as they head into finals week next week.

The Bulls threatened to completely destroy the Airs in the third, with back to back triples for Everard Bartlett extending the lead to 29, but credit the Airs as they came back with some long range bombs of their own to reduce that deficit to 22 at the final break.

The final quarter was largely academic as both sides took the chance to run their benches and rest some weary bodies. The frustration was showing for the Airs though, with MVP leader Derone Raukawa giving up an unsportsmanlike foul as he and Nikau McCullough engaged in a little push and shove after the whistle, McCullough earned the same rebuke from the officials.

Best for the Airs – who never stopped trying, were the usual suspects in MVP candidates Raukawa (19 points, 4 rebounds, 4 assists) and Marcel Jones (17 points, 9 rebounds and 4 assists. Mitch Dance stepped in with 10 points from the bench.

The Airs now rest up and see where they finish and who they play first up in fianls week, while the Bulls play their final regular season game against the Rams at 3:30pm on triple-header Saturday at Trusts Arena, with all tickets half price in celebration of Pasifika.

Talking Points:
• Are the Airs a little leg weary in what was a sluggish effort to end their regular season, they enjoy a few days rest now and await confirmation of their finals opponent.
• The Bulls employed a three-quarter court press to get the ball out of Raukawa’s hands, something other coaches will no doubt be taking note of
• Everard Bartlett turned back the clock with all five of his triples – he has to be respected and on a night like this can take a game away from any opponent