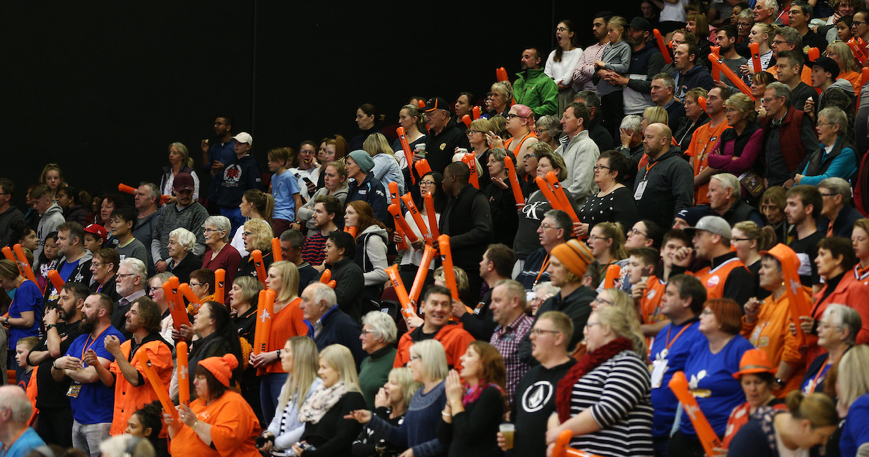 It's an age-old desire of every team in sport - make your home a fortress!

Home court advantages in basketball can be built on many things, passionate crowd support usually sitting at the very top of the list, but however a team goes about building a fortress the fact is racking up wins at home will always go a long way to ensuring a team will be in the finals mix.

So, which towns are the toughest to visit in the Sal's NBL? Here's our five biggest fortresses - the top two we just couldn't split, while our fifth-placed venue is ahead of its time given it has never hosted a game!

As a visiting team, grabbing a win at one of these venues will always deliver an extra fist pump .... or two!

Over their first 10 years in the League, the SIT Zero Fees Southland Sharks have claimed three titles and built a fortress others are envious of. For a visiting team a win at the ILT Stadium Southland is almost like two, such is the tough task. The Sharks attract some of the most passionate fans in the Sal's NBL, and more often than not they show their support with colour (orange of course), loud voices and a genuine appreciation and love for their players. Make no mistake, the Shark Tank is a fortress like no other in New Zealand and visiting teams usually find the going tough.

Well, we just couldn't split them. You simply cannot deny the number of wins the Wellington Saints rack up on their home deck. That said, the Sal's NBL record books point to the Saints winning games no matter where they play. The Saints have a habit of putting high-calibre teams together, so the likelihood is they could turn any venue into a fortress. Usually packed with 3,000-plus Saints fans, TSB Bank Arena is arguably the League's most picturesque venue (nothing beats a clear afternoon or evening on the edge of Wellington's beautiful harbour) and it generates a daunting cauldron for visitors, which the Saints always use to their advantage. With just one home loss in the last three seasons it's fair to say a trip to Wellington rarely ends with a smile.

Both the Alloyfold Canterbury Wildcats and Wheeler Motor Company Canterbury Rams have called Cowles Stadium home for many years, and both local teams have won their fare share of games on their home boards. A full crowd at Cowles generates an amazing level of noise, the older-style venue delivering acoustics that literally reverberate, and more often than not it helps lift the local teams in times of need. When Cowles Stadium starts rocking, it can be a tough place for visiting teams to conquer.

This might take a bit to sink in given the last three years have returned a 13-14 record at home for the Mike Pero Nelson Giants, but most visiting teams would agree that a trip to the Trafalgar Centre is always a tricky clash, especially if the local fans turn up in big numbers. The Giants have been in the League from day one and over that time they have built a real 'us against the rest' feeling amongst a town filled with passionate fans. When the Trafalgar Centre fills it is electric, a theatre much like Cowles Stadium where the noise echoes and hits you with force. As an aside, it's also a stadium where no matter where you sit, you feel like you're right on top of the action, which the fans love. Visiting teams have proven you can win at the Trafalgar Centre, but there is always a sense of caution.

Now this really is a selection that will come as a surprise, mainly because the EnviroNZ Franklin Bulls have never played a game in the Sal's NBL, and the venue has never been used for a League clash. However, for those who have been to the venue and can stop and picture how it would be set-up for a Sal's NBL game, you will probably agree that it could quickly become a fortress like no other. One of the most intriguing things ahead of us in season 2020 is to see how visiting teams cope with a full stadium at the Franklin Pool & Leisure Centre. It's hard to describe, but it has the potential to feel like you are playing in a big square box with screaming fans literally on top of you, hanging on to the edge and looking down at you. Though an older venue, it does have all the hallmarks of being loud, proud and very intrusive for those who come to visit the Bulls. One thing for certain is that the new kids on the block will try and build an atmosphere from the get-go, particularly given it could lead to some extra wins!

Other venues worth a mention include Pettigrew Green Arena (Taylor Hawke's Bay Hawks) in Napier, which can get VERY loud, the Edgar Centre (Otago Gold Rush) in Dunedin, and AUT (Harbour Breeze) in Auckland. All have their little quirks and can be tough places for visiting teams to win at.