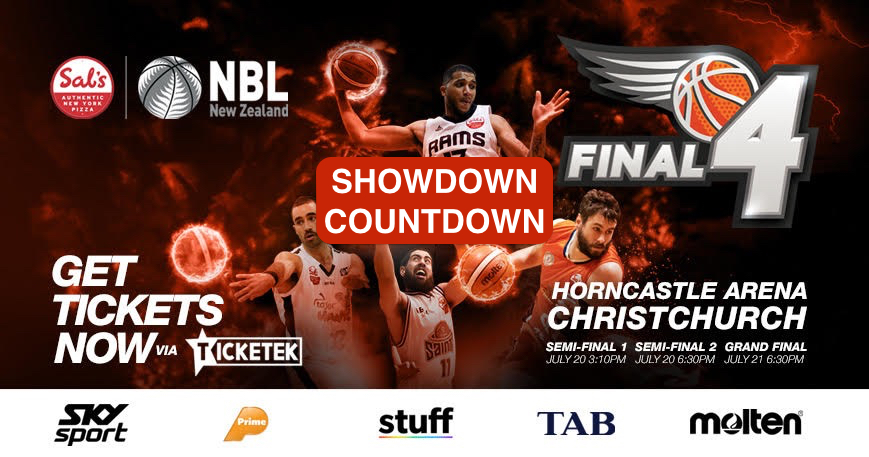 Welcome to our daily Showdown Countdown where we’ll keep you updated daily with all the news and views ahead of the 2019 Sal’s NBL on July 20/21 at Horncastle Arena in Christchurch.

Opening times each day of the Final 4 at Horncastle Arena have been announced.

There are only 60 VIP Weekend Packages remaining, These passes include courtside seats for all five games across the weekend, plus a ticket to the Annual Awards Night at the Christchurch Casino on the Friday night where all the big awards for 2019 will be announced.

The league has announced Fan Free Friday at the Final 4 with the doors at Horncastle Arena open to everyone to come along and enjoy seeing all four teams on court across the day as they go through their final training session ahead of the weekend’s action. Details HERE.

The World Cup will be on display at the Final 4 and fans will be welcome to take a photo with basketball most prized trophy. Details are HERE.

HAWKS - the Hawks have two injury concerns ahead of the Final 4 with at least one of them expected to cause some headaches right up until tip-off in their Semi Final against the Rams. EJ Singler sat out of the team's R13 clash with the Rangers due to a slight niggle, but he is expected to play in R14, against the Rams anyway. The more concerning injury is Daniel Kickert, who recently returned home to Australia to undergo more treatment on his troublesome back. At this stage it is unknown whether or not Kickert will be available for the Final 4 with his status not likely to be clear until just hours before tip-off.

RAMS - Isaiah Wilkins returned from a should injury in R13 and looks to have got through a tough match-up with the Saints without any concerns. The Rams appear set to go into this Thursday night's clash against the Hawks at full strength, but how each team tackles this game remains a mystery given they will clash again just over a week later in a Semi Final. Don't be surprised to see the Rams run their starters for much of the first and third quarters, before handing over the duties to their second unit.

SAINTS - Leon Henry got through the clash with the Rams in R13, playing 19 minutes and looking injury-free. Whether or not the Saints give their ageing forward the week off against the Rangers will be determined later in the week. With little to play for against the Rangers, other than maintaining their unbeaten record for season 2019, don't be surprised if we see Sunday Dech playing the bulk of the minutes for the team this Sunday.

SHARKS - finally back to full strength for the first time in weeks, the Sharks looked very slick early in their game against the Huskies last Friday night. In good news for the reigning champs, Roberto Nelson returned from a calf injury and got through 14 minutes of action, scoring 10pts with a couple of sublime triples. In an added bonus for the Sharks, they are the only Final 4 team that doesn't have to travel in R14 - will this be a factor at Horncastle Arena a week later?