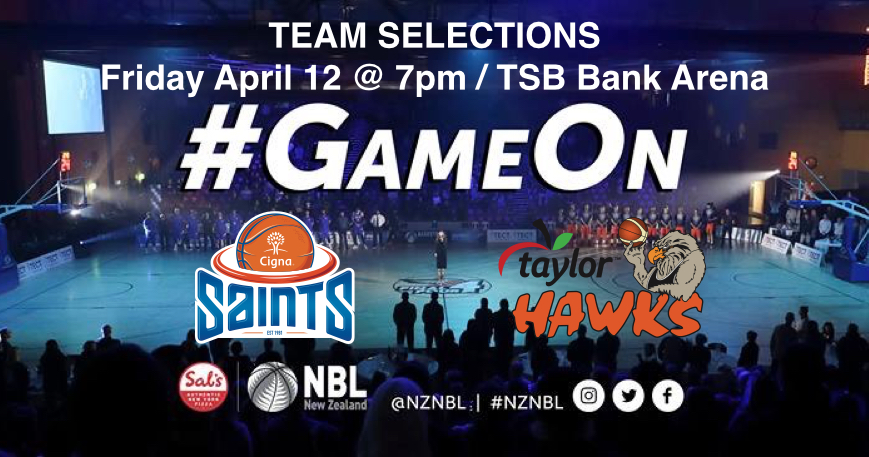 GAME PREVIEW
Last year’s runners-up, the Cigna Wellington Saints, start their season against the Taylor Hawks and will want to rid themselves of the bitter taste they left the 2018 Sal’s NBL season with. The Saints have a new Head Coach in Paul Henare and made numerous big name signings for what they hope is a year they return to their title-winning ways. Reuben Te Rangi is back in the capital after a year away in Southland and big man Rob Loe will make his debut in the NBL when he suits up in blue. Henare will also have last year’s MVP, Shea Ili, along with Tall Black big man Jordan Ngatai to pair with Loe in the frontcourt. The Hawks are largely unchanged from last year’s Final Four team but have added a experienced campaigner in Daniel Kickert. The Hawke’s Bay outfit did well to return to the playoffs after a four-year absence and with their new signings will be confident they can return for another shot at the big prize come July. Keep an eye out for a battle down low between Loe and Bowman for what shapes to be nothing short of an arm-wrestle and will go a long way to deciding this one.

*Live on the TRIBE app at 7pm - download the app to your phone.

From The Coach – Paul Henare
The 2019 Saints squad is a very different one from last season with only three returning players. Although we have had a smaller pre-season with guys coming in late, I’m very excited with the group we have put together here and we’re looking forward to building on things each week to get better and better as the season goes on.

From The Coach – Zico Coronel
A lot of hard work and sacrifice has been made by our club - sponsors, management, coaches, training staff, and especially the players - to prepare for the opening week of the 2019 Sal’s NBL. We may not have the resources of some franchises, but we’ve built a dangerous team and we’re really excited to challenge ourselves on opening night against the class franchise of our league, the Cigna Wellington Saints. The Mills Family and Head Coach Paul Henare are to be commended on the quality of the roster they’ve constructed. I would also like to recognise the solemness of the occasion as we remember a great Saint, Justin Toebes, who passed away since the conclusion of the 2018 season, and will remember his immense contributions along side the victims of the Christchurch tragedy. We’ve had a terrific pre-season despite some adversity with unavailability and injuries, we can’t wait to see how beautifully we can play basketball on Friday night!