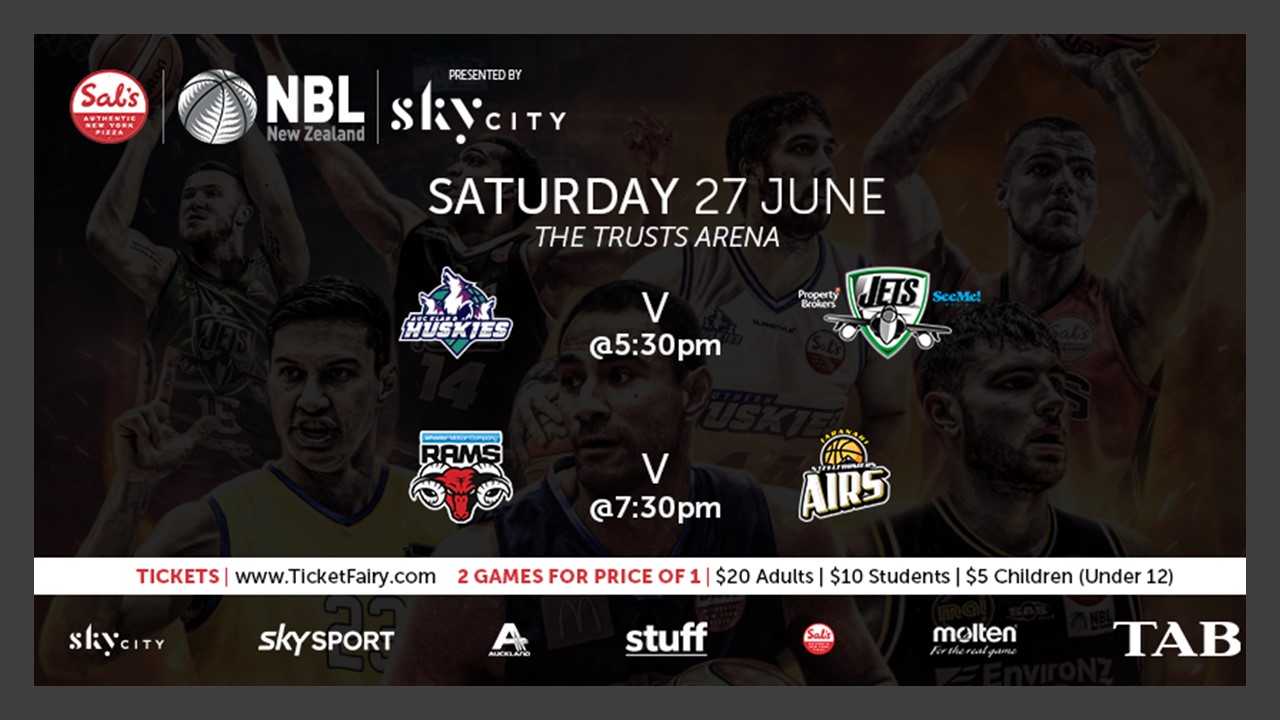 The Huskies and Jets are searching for a win, while the Rams and Airs are hoping to remain unbeaten. A huge Saturday of Sal's NBL action is coming your way with two massive games, plus we have St.Kents up against Lakeside Boys as a curtain raiser!

Preview: Both teams sit at (0-1) and are looking for their first win. The Property Brokers, See Me Media Manawatu Jets were very impressive first-up in a thriller against the Nuggets, a basket-for-basket contest that went down to the dying seconds. Vodanovich, Bezzant and Harris look a deadly combination, while Taane Samuel looks in great shape. Meanwhile, the Auckland Huskies looked a little rusty in an opening 32pt loss to the Rams, especially with ball in hand with a low shooting clip. The good news for the Huskies is the shooting will pick up quickly and they will be better off for that first run. While there is word Izayah Le'afa could be out of quarantine and available for this game, it's more likely the Huskies may prefer to hold him out until tomorrow's clash with the Bulls. If Le'afa doesn't play you can't help but feel Jayden Bezzant will be a class above and will enjoy seeing plenty of the ball for the Jets. The big match-ups will be down low where Vodanovich and Samuel will clash with Henry and Smith-Milner. The Jets look the goods, especially with a string starting unit, while the Huskies will just be super keen to bounce back, play better and try and take some winning form into tomorrow's Battle of the North.

Talking Point: Some thought Hyrum Harris was a bit quiet in his opening game, but a deeper look will show you the swingman delivered a very handy 9pts, 11rbs and 7ast in 22 minutes. If Harris keeps delivering a near triple-double every night the Jets coaching staff will be very happy.

Huskies Weapon: If Le'afa plays he will be one to watch (again, unlikely to play, expect to see him debut on Sunday), but it's the teaming up with Wilson and Murray that should get people excited. This three-guard unit is as exciting as they come in the competition. If Coach Braswell can get these three players clicking they will be a lot of fun to watch.

Jets Weapon: Tom Vodanovich wasted little time in showing his class in his first outing. The versatile forward looks eager to be a leader and a force, and from what we saw in his opening game there is every chance he's going to deliver some big numbers every time he steps out. Both Leon Henry and Tohi Smith-Milner will have their hands full here.

Preview: Over the years it's not often we would have talked about the Wheeler Motor Company Canterbury Rams and Steelformers Taranaki Mountainairs being game of the week, but that's the way this contest is shaping up as both go in 2-0 and looking good after dual midweek wins. Both teams have a mix of experience and a load of young guns, which will make for a quick and furious contest. Airs pair Raukawa and Jones look as good as any combo in the league, while Britt and Gillooly are already shaping up as a force for the Rams. The match-up of Britt and Raukawa is mouth-watering, both have looked sensational and are clearly vital to their respective teams. Question might be whether or not the Rams have someone who can quell Jones? This game is going to be a lot of fun. Settle in and enjoy!

Talking Point: The Airs are 2-0 after dual wins midweek in a back-to-back against the Giants and Bulls. What a start! Now they face the slick Rams in a battle for both teams to maintain an unbeaten run in the opening week of play. Expect this game to be played at a frantic pace.

Rams Weapon: Taylor Britt, need we say more. The flashy floor general has hit the ground running and looks in great shape. He looms as one of the best players in the competition and there is no sign of him slowing down. Make no mistake, spending the off-season with the Perth Wildcats has elevated Britt to the next level. By the way, in case you missed it he is grabbing 9 rebounds per game!

Airs Weapon: Marcel Jones has already delivered two double-doubles and can basically be backed in to do the same every night. His performance against the Bulls in particular was first-class.