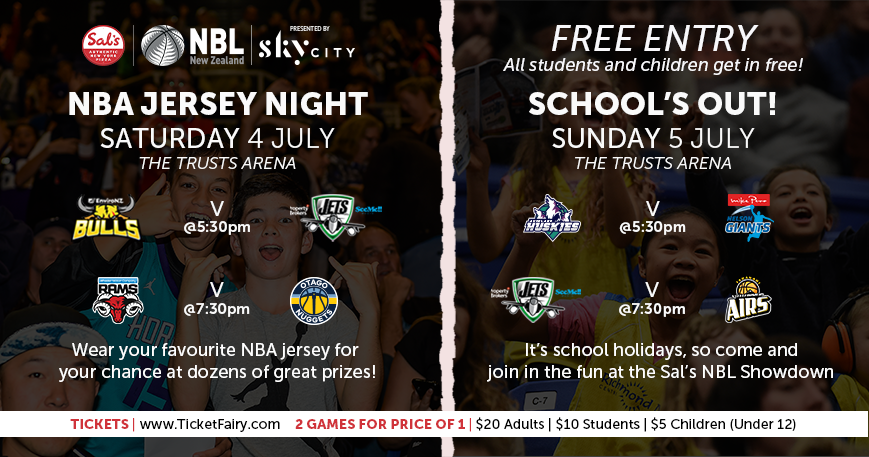 School's Out! It's time to celebrate the school holidays with an evening at the Sal's NBL.

All students and children get FREE entry to tonight's two games, while adults pay only $20. And remember, every night you get to watch 2 games for the price of 1.

Proudly presented by SkyCity, all tickets for these two games are available at the door. Ticket counters at Trusts Arena will open from 4pm.

Preview: No Leon Henry (Huskies) and no Mika Vukona (Giants), but perhaps Thane O'Leary (Giants) back in? Both line-ups won't be complete, which could lead to a few tactical decisions, especially for the Huskies. With Henry out we could see the Huskies roll out some small-ball, especially involving the run and gun of Le'afa, Wilson and Murray, which would be exciting. When it comes to the tall timber, Smith-Milner will have the big job of trying to shut down Karena, who is in ripping form right now. The wing match-ups will be critical for both teams. Brooks and Trathen are looking strong for the Mike Pero Nelson Giants and will take some stopping, while Murray and Wilson are two of the competition's most exciting young players and will get the green light to do their thing. The one match-up that could decide this game is Le'afa against Aiolupotea, a tough assignment for the young Giants PG, but a great challenge all the same.

Talking Point: The Huskies will need to adjust with Leon Henry absent through suspension, so maybe look for the Aucklanders to play a fair bit of small-ball. They certainly have the athleticism to do something interesting here and it may end up delivering plenty of upside.

Huskies Weapon: Izayah Le'afa showed in his second outing just how dangerous he has the potential to be in this competition. The Huskies looked a lot better with Le'afa calling the shots last time out, and it led to an opening win. There is little doubt that Le'afa will get as many minutes as he can handle.

Giants Weapon: Mike Karena has rocketed to being one of the competition's very best players since returning from a minor ankle tweak. The Giants' centre looks fit and healthy, is full of run, his baby hook is on target and he is proving to be a real handful for opposing teams. Karena looks set for a massive month coming up.

Preview: The Property Brokers, See Mee Media Manawatu Jets (2-3) face the back end of another weekend double and it will be a tough gig against the Steelformers Taranaki Mountainairs (3-2). Once again the Jets will be without Hyrum Harris (hip), but they still have plenty of firepower available to them in Vodanovich, Bezzant and Samuel. This contest could come down to the match-up between Bezzant and Raukawa, they are two high-scoring playmakers with bundles of energy. Look for Temara to get the tough job on Vodanovich, while Samuel will likely prove a handful for Wynyard and anyone else the Airs throw at him. We could see Jones go to Vodanovich and Temara playing on Samuel. Speaking of Jones, you know he'll grab a double-double, depending on the size of those numbers could well be the difference in this game.

Jets Weapon: Taane Samuel is on the rise. The young centre continues to find his feet in the Showdown and has become a key player for the Jets. Through five games, Samuel is averaging 17.2pts and 5.8rbs, along with 2.2 treys per game.