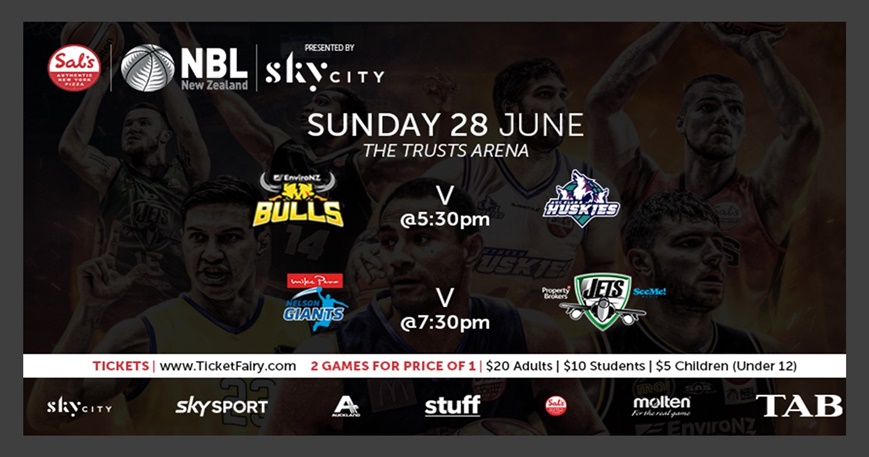 Our Sunday action in the Sal's NBL starts with a monster showdown between the EnviroNZ Franklin Bulls and Auckland Huskies, with the two winless teams searching for a win in the first ever Battle of the North.

The second game tonight will see the Property Brokers, See Me Media Manawatu Jets up against the Mike Pero Nelson Giants. The big news here is the return of Mika Vukona, Mike Karena and Dane Brooks. It's the first time we have seen Nelson's top three draft picks in action.

Preview: Both teams sit at (0-2) and will be desperate for the win. It's the first time the two 'northern' Sal's NBL teams have ever clashed, so there will be plenty of bragging rights that come with victory. A well publicised build-up to the game has uncovered a bit of niggle between the teams and that looks set to spill out onto the court. Captains Leon Henry (Huskies) and Everard Bartlett (Bulls) didn't hold back on Friday when talking about the clash - both players didn't mince their words when talking about what the game meant to them. The Huskies will be hopeful Izayah Le'afa is right to play after exiting quarantine, the fledgling Auckland team needs some extra scoring punch and playmaking, two things the highly-touted guard can deliver. The Huskies also need a better collective shooting effort, an achilles heel that has seen them well behind the pack to date. For the Bulls, some competitive signs came through in their opening two games, but they still find themselves searching for a first-ever win. A lot will again ride on the shoulders of Davidson, but with some help from Kelman-Poto and Timmins the Bulls will keep improving. Expect a fierce battle, the winner will finally open their account, while the loser will go into Monday's rest day facing a 0-3 start to the season.

Talking Point: Both teams will be eager to get a bit more out of players and their is nothing like a local rivalry to lift. The big men in both units have another level in them, so expect a really good battle between Henry and Smith-Milner up against Kelman-Poto and Timmins. This could be where the game is won, and lost.

Huskies Weapon: If Izayah Le'afa does play there will instantly be a lot on his shoulders. The first-round draft pick watched on last night as his team was well and truly grounded by the high-flying Jets, so he will know the task ahead of him. The Huskies desperately need a floor general and Le'afa looks likely to be the man.

Bulls Weapon: Isaac Davidson has arguably been the stand-out rookie of week one. The college returnee has been a shining light for the Bulls and will no doubt receive the most attention from the Huskies as they try and work out a way to quell the talented and versatile guard/forward.

Preview: This contest takes on a bit of a different look if the touted return of Mika Vukona, Mike Karena and Dane Brooks comes to fruition for the Giants. Let's not forget the talented trio were the top three picks for the Giants and all three haven't played a minute yet. If they 'big three' do slot back in to the Giants' roster, it will free the likes on Nic Trathen and Tom Ingham up a bit and that could be a nice edge for the Nelson lads. The Jets are in good touch, their barnstorming win over the Huskies last night ensures most players are in a bit of form, and none more so than Tom Vodanovich and Hyrum Harris. The classy duo look strong and have embraced their teammates, the Jets look a formidable unit and still have Nelson Kirksey to come. Look out! The battle between Vodanovich/Samuel and Vukona/Karena will go a look way to deciding this game, and let's not forget the latter pairing still need to find their feet. Also watch out for Dane Brooks, he's a talented scorer and will be looking to make his mark early in the season.

Giants Weapon: No doubt the influx of Vukona, Brooks and Karena will make a massive difference to the Giants, but let's not forget the work Nic Trathen has done so far. Trathen has taken his chance to be the team's go-to player and has delivered in spades. While some big names are set to return, keep an eye on Trathen as he could slip under the radar a bit.

Jets Weapon: It's hard to split Tom Vodanovich and Hyrum Harris right now, they are both in full beast mode and loving a chance to showcase their talents to the viewing audience. Both were in amazing form last night against a lack-lustre Huskies outfit, dismantling them with huge numbers. Both will be keen to keep that going tonight against the Giants.