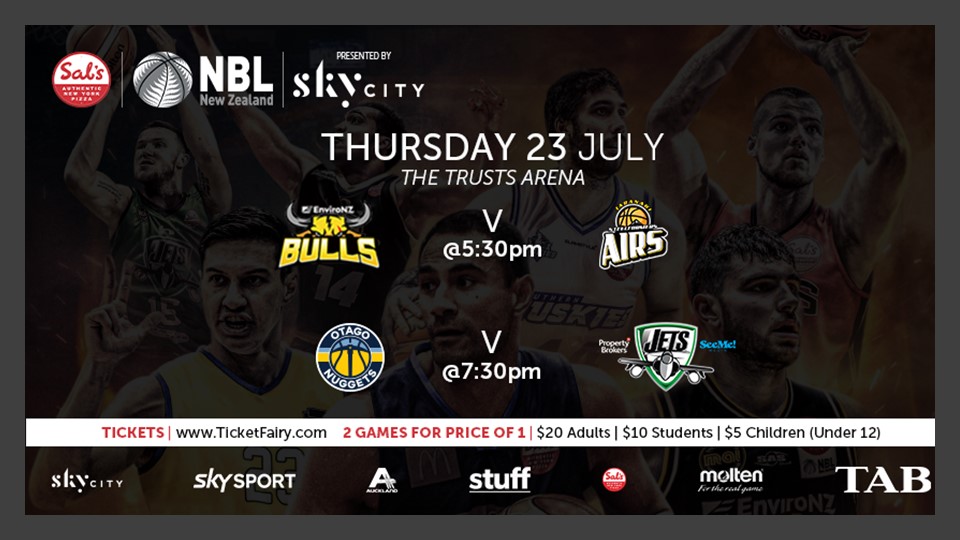 A huge night of Sal's NBL Showdown action coming up with the top 4 teams doing a battle as they jostle for positions ahead of Finals Week. The higher you finish the better the finals run, so the teams are playing for everything right now.

At 5:30pm it's the Steelformers Taranaki Mountainairs (3rd) up against the EnviroNZ Franklin Bulls (equal 4th), followed at 7:30pm by the Fluid Recruitment Otago Nuggets (1st) taking on the Property Brokers, See Me Media Manawatu Jets (2nd).

Catch all the action at Trusts Arena and remember, every night you get to watch 2 games for the price of 1.

Adults are $20, Students $10 and Children (U12) just $5. Tickets are available at the door, or can be pre-purchased online HERE.

Preview: The Bulls have been inconsistent at times, but still hold the record of being the only team never to change their starting unit this season. They also strung four wins together at one stage, so they can get on a roll. WIth finals coming up next week any team getting on a roll will want to start now. That said, the Bulls are yet to beat the Airs to date. Both previous games have been competitive, but the duo of Derone Raukawa and Marcel Jones always seem to find a way! If the Bulls are to get a win here they will need to find a way to stop Raukawa and Jones, that's where it's at. Isaac Davidson is due for a big game, so keep an eye on him, while some increased scoring from Stubbins and Bartlett on the outside is always a plus for the Bulls. Dom Kelman-Poto continues to step it up, and no doubt Sam Timmins will be keen to bounce back after a quiet game last outing. For the Airs, Shane Temara came off the bench last night and it worked (arguably his best game of the season) - will the Airs stick to the change or will Temara slot back into the starting unit? Another good game on the way, expect yet another thrilling finish.

Preview: The Nuggets and Jets both look set for a big run at the title this season, and they could well both make it through to the Grand Final, but should that happen the Jets would like to work out a way to get over the Nuggets. In their last meeting the Nuggets delivered one of the best and most comprehensive wins we've seen this season, however the Jets looks far more settled with Hyrum Harris back on court and have been mighty impressive this past week. Both teams should be at full strength for this one nd once again we expect to see some really good match-ups. No doubt the Nuggets will have underlined Tom Vodanovich in the scouting report, and his ability to hit triples. Josh Aitcheson continues to rise for the Nuggets and will be one to watch, while Kane Keil has formed a great partnership with Jordan Hunt on the inside and they continue to impress. For the Jets, it is largely about the starting five. If they fire, the Jets fire. This promises to be one the best games thus far. Way too close to call. Enjoy!