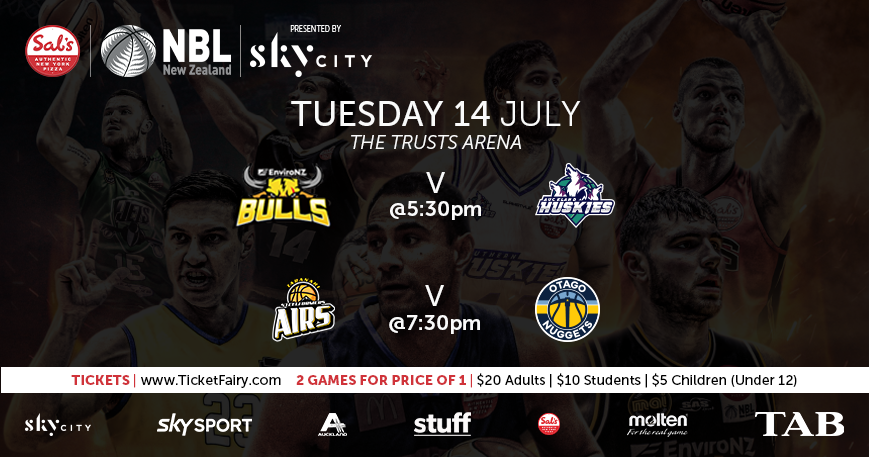 The Sal's NBL enters Week 4 with two massive games, starting at 5:30pm with the second edition of the Battle of the North between the Auckland Huskies and EnviroNZ Franklin Bulls. In their first meeting the Bulls claimed a 63-59 win in a dour contest. Can the Huskies bounce-back and level the series? At 7:30pm two of the competition's in-form teams clash - the Fluid Recruitment Otago Nuggets up against the Steelformers Taranaki Mountainairs - two teams that can really pile on the points!

Remember, every night you get to watch 2 games for the price of 1.

Adults are $20, Students $10 and Children (U12) just $5. Tickets are available at the door, or can be pre-purchased online HERE.

Preview: The Huskies and Bulls meet for a second time and if the first round of the Battle of the North is anything to go by then we should expect another close, physical and dour contest. Maybe a bit more scoring would be nice this time around! The Bulls took the first game, which coincidently was their first ever Sal's NBL win, so it was one they will remember for a long time. Not a lot of love is lost between these two teams so expect a battle. The Bulls have proven to be a very hard team to score against, while the Huskies will basically deliver according to their shooting clip - so far they have struggled for consistency when it comes to landing shots and their fortunes usually come down to whether or not the ball is dropping through the net. Leon Henry will be keen to bounce back from an off shooting night last time out, while Taine Murray will be hoping for another shooting masterclass after his 35pt outing on Sunday. Izayah Le'afa could be the difference if the Huskies get up after missing the first contest between the two teams, so keep an eye on him. Toni Smith-Milner twisted his ankle on Sunday night so he will be unlikely to play, but check for updates closer to tip-off. For the Bulls, Davidson, Kelman-Poto and Timmins continue to improve together and will again be the keys to the Bulls winning. Take note - the Bulls continue to be the only team in the Showdown yet to change their starting five, so they are very settled and that will count for plenty as we head towards Finals Week. Hard to see this being a blowout, either way, too much at stake between these two so expect another thriller.

Preview: This looks a ripper of a game. Thought it was a 26pt margin last time, expect it to be much closer this time around. The Nuggets and Airs are gathering pace and they sure know how to score, so look for this game to be free-flowing and played at pace - let's hope so anyway! Kenny vs Raukawa, Ngatai vs Jones, Tuffin vs Aitcheson …. some great match-ups to watch and enjoy. While there is still a while to go, many pundits have these two teams right in the mix of their Grand Final predictions, they are two very even units and play some exciting basketball. Can Raukawa and Jones be slowed? So much for the Airs goes through their top two players and if they fire you know the Airs will be right in it down the stretch. Can Kane Keil and Jordan Hunt continue their rise? Who will win the Tuffin vs Aitcheson battle? Will the Airs score over 100pts again? Can the Nuggets keep the Airs off the glass? This could well be the best game we've seen so far in the Sal's NBL Showdown. Let's hope it lives up to expectations!