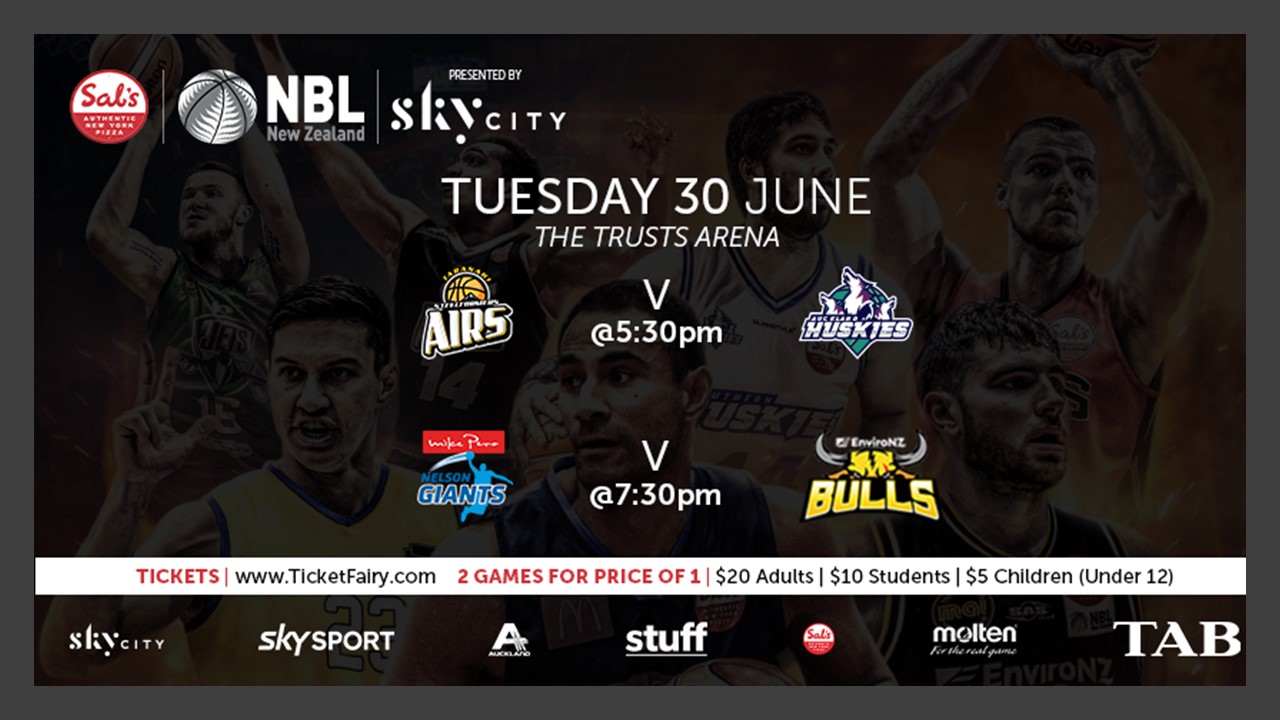 Week 2 of the Sal's NBL Showdown tips-off today with the Auckland Huskies (0-3) searching for their first win. After a thriller against the Bulls on Sunday, the Huskies now face the Steelformers Taranaki Mountainairs (2-1) who are coming off a loss to the Rams and will be looking to bounce back hard.

Today's second game will see the Mike Pero Nelson Giants clash with the EnviroNZ Franklin Bulls with both teams coming off opening wins on Sunday.

And remember, every night you get to watch 2 games for the price of 1.

Preview: With the Huskies (0-3) still searching for an opening win they will get no favours here against an Airs team about to face a tough double (they play the Nuggets on Wednesday night). In week one the Airs also had a back-to-back and grabbed two wins, so the challenge won't phase them. The Huskies went down in a thriller against rivals Franklin on Sunday, so they will be smarting. Izayah Le'afa will be better for the run and won't shoot as poorly as he did on Sunday (1-15), while the likes of Taine Murray and Tohi Smith-Milner are looking better with every game. Leon Henry also found some good touch last time out and looks like he'll keep delivering solid numbers. The chances of a Huskies victory here possibly rest heavily on whether or not they can land their shots. So far, over their opening three games, their shooting has left a lot to be desired. If they can start landing shots they are a chance. Mind you, they also need to find a way to slow Marcel Jones and Derone Raukawa, while Kenneth Tuffin is quickly emerging as another threat for the Airs as well.

Talking Point: Both teams are coming off a loss and will be eager to grab a win. With Izayah Le'afa now settled, look for the Huskies No.1 draft pick to get rolling and show his class. His match-up with Derone Raukawa will be the one to watch.

Airs Weapon: We all know what Raukawa and Jones bring to the table, but Kenneth Tuffin (12pts, 5rbs, 1.5ast per game) is quickly becoming a very strong and reliable third wheel. Keep an eye on him over the next couple of nights against the Huskies and Nuggets. He's a strong shooter and is showing some classy change-up ability in his game.

Huskies Weapon: Taine Murray is playing big minutes and starting to feel more at home with every game he plays. The talented teenager is proving to be very reliable at both ends of the floor and once again he'll be relied upon here if the Huskies are a chance to topple the Airs.

Preview: This looms as a quality contest that will go down to the wire. Both teams come in with renewed confidence after recording opening wins on Sunday night. For the Giants it was somewhat of an upset victory over the Jets, stemming from a very competitive team effort that looks like being the hallmark of the team - it's a collective team effort that they will rely upon in every game and it worked a treat against the Jets. For the Bulls, a memorable first-ever Sal's NBL win on Sunday over the Huskies will go a long way towards building confidence and they will take that into this tough match-up. Isaac Davidson and Sam Timmins continue to get better with every game, while you know Dom Kelman-Poto is on the verge of delivering a big performance. Don't expect this to be a high-scoring affair, a mid-80s score might bet the job done.

Giants Weapon: Has the night arrived - will Mika Vukona play his debut game in the Sal's NBL Showdown? If the Giants leader steps on floor you will instantly see every teammate walk a foot taller, and given they are coming off a great win against the Jets on Sunday night there is a bit of confidence amongst this group. Vukona will bring sharp defence, great court leadership and another strong body at both ends of the court. It will be great to see the champ out there. Fingers crossed.

Bulls Weapon: Sam Timmins is quickly becoming one of the best rim-protectors in the competition. After 6 blocks against the Huskies on Sunday, look for Timmins to keep growing in confidence. His battle tonight with Mike Karena will be one to watch.