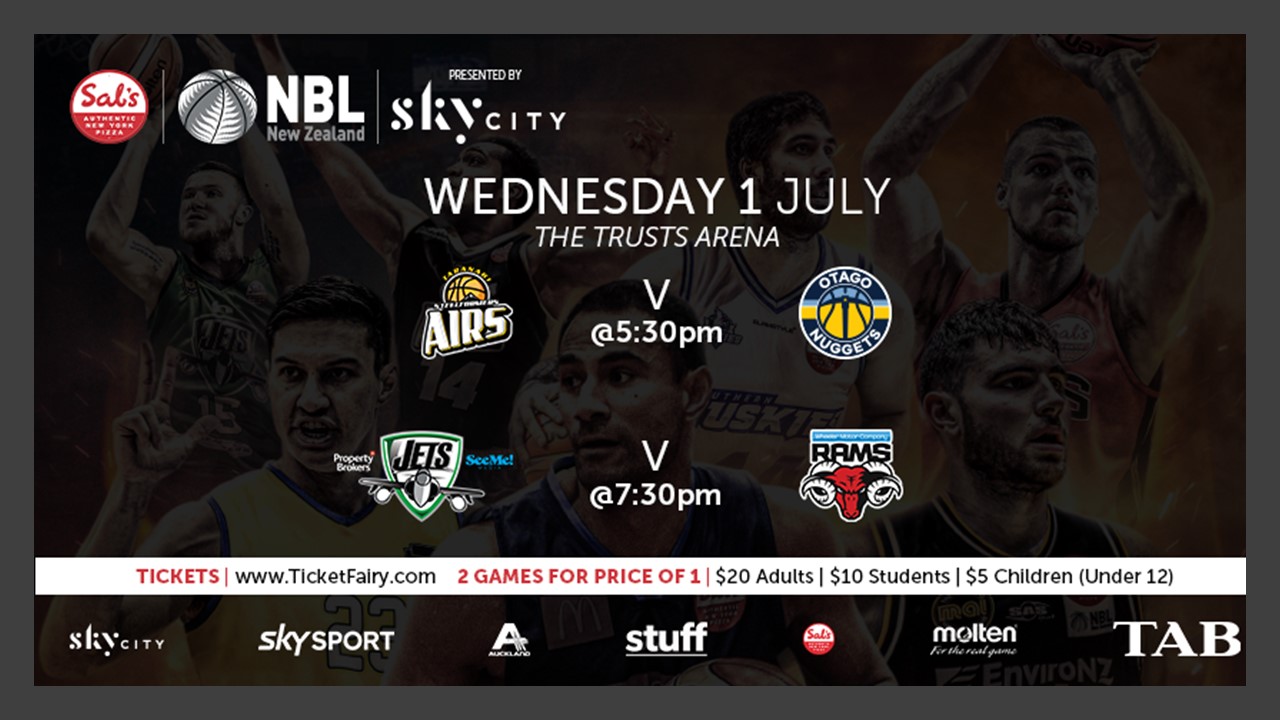 It's Filipino Night in the Sal's NBL and it all centres around our opening game when the Airs (Kenneth Tuffin) and Nuggets (Richie Rodger) go head-to-head. Tonight's second game will also deliver plenty of highlights with the Jets (1-2) going into battle against the Rams (3-0).

And remember, every night you get to watch 2 games for the price of 1.

Preview: The Steelformers Taranaki Mountainairs are on another double, except this time they are coming off a loss last night (to the Huskies) and looking to split the double, whereas last week they scooped two wins. The Huskies shot the lights out last night, something they failed to do in week one, so the Airs were caught hopping, but that said you can expect some work has been done overnight on defence. The Airs have a solid starting group, and Kenneth Tuffin is really starting to emerge as a part of the team's big three, joining Derone Raukawa and Marcel Jones. For the Nuggets, this is their first game in six days, they are refreshed, they sit 2-0 and they have done a lot of team bonding during the break. Jarrod Kenny and Jordan Ngatai showed their class in week one and really have excelled at taking the younger players under their wing. The Nuggets look a good team and in sync. Their big test will come when they cop a loss and for all of us to see how they react? For this game, the Nuggets will start favourites. Kenny is the best defensive small guard going around, so Raukawa will be tested, while the Airs need to find a way to slow Ngatai and an ever-improving Jordan Hunt.

Talking Point: Can Derone Raukawa hit 20-plus points against Jarrod Kenny? Look for the veteran to apply the defensive screws. It's also Filipino Night with the game being broadcasted live into the Philippines - look for the Kenneth Tuffin versus Richie Rodger showdown.

Airs Weapon: Kenneth Tuffin is improving with every game and making the most of every possession he gets. We all expect bug numbers from Raukawa and Jones, which we're getting, but Tuffin is quietly slipping under the radar right now.

Nuggets Weapon: Keep an eye on Jordan Hunt. The athletic big man is starting to form a good combination with Kenny and has some slick moves. You can't help but think Hunt will be a player we start talking more about as the weeks progress.

Preview: This will be a very interesting contest. Both teams have had a couple of days to recoup and come in ready to kick-start their second week with a win. The Property Brokers, See Me Media Manawatu Jets (1-2) have suffered a couple of very close losses and will want to start turning those tight games into wins, while the Wheeler Motor Company Canterbury Rams look the most in-sync team in the competition and have the results to prove it. Look for Quintin Bailey tonight who comes in as the permanent replacement (Rank 3) for Joe Cook-Green, the young man has some big wraps on him and should settle in nicely. Taylor Britt and Jayden Bezzant looms as a key match-up, while the likes of Mac Stodart, Alex Talma and Tom Webley will need to work together to quell Tom Vodanovich and Taane Samuel. Look for Vodanovich and Harris to use their size and experience to outwit Canterbury's younger players, while a keen eye for mis-matches could work in their favour as well. Keeping a sustained winning run is going to be incredibly tough this season - can the Rams make it four wins in a row? As for the Jets, they have one of the best starting units so a quick return to the winner's column will be sorely sought after.

Jets Weapon: Hyrum Harris is emerging as the competition's best all-round player with stats to back it up. While he has some handy players around him, it hasn't stopped Harris from monstering smaller guards and taking advantage of mis-matches. The competitive guard looks set to be a dominant force across the whole season.

Rams Weapon: Taylor Britt - need we say more! After the opening week of competition Britt has emerged as the competition's leading player and he doesn't look like slowing down any time soon. Jayden Bezzant is going to have to bring is best defensive game tonight.