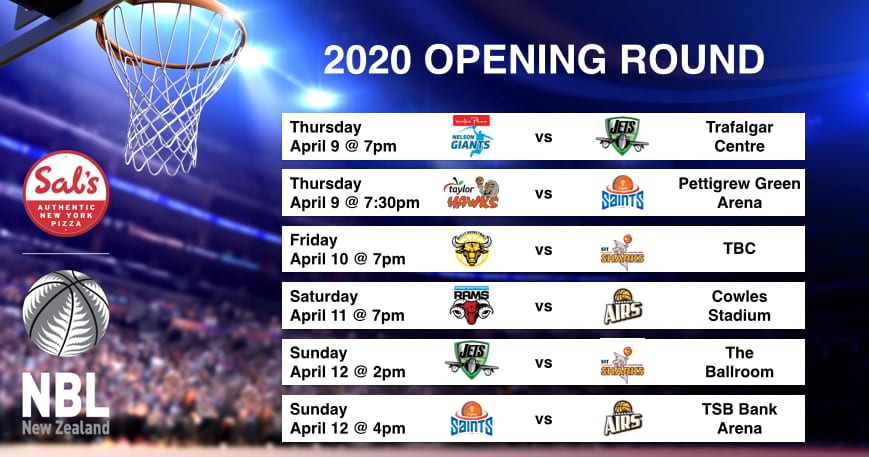 A showdown between the Hawke's Bay Hawks and Wellington Saints will headline the opening round of the Sal's NBL 2020 season with basketball fans set to enjoy six games across their Easter break.

The 2019 Grand Final opponents will go head-to-head at Pettigrew Green Arena on Thursday April 9 with the clash beamed live around the nation on SKY Sports and Prime Television. The Good Friday eve game is expected to fill the stadium as both teams attempt to start their 2020 campaign with a win.

As an interesting side note, the reigning champs (Saints) will step out with new coach, Zico Coronel, who will find himself pacing the sidelines up against his former team, the Hawks. Coronel recently signed with the Saints, returning back to the team where he was an assistant coach for seven seasons prior to joining the Hawks as head coach.

The 2020 season will tip-off in Nelson at the Trafalgar Centre where the Nelson Giants will host the Manawatu Jets, the big question for Giants fans will be whether or not Mika Vukona will be back on board and leading the way?

There will also be plenty of anticipation surrounding the Franklin Bulls when they hit the court for their first ever Sal's NBL game with the Sharks set to pay them a visit on the Friday night. While the Bulls are yet to appoint a coach, the Sharks will be led by new coach Rob Beveridge, a more than handy pick-up to replace Judd Flavell who along with his family has moved to Melbourne.

The Rams also open their campaign at home with the Mountainairs travelling south for a tough road double which will start at Cowles Stadium on Saturday night before they head to the nation's capital.

Easter Sunday will feature four teams in action for the second time over the opening round with the Jets hosting the Sharks and the Saints welcoming the Airs.

The full Sal's NBL 2020 schedule will be released tomorrow.