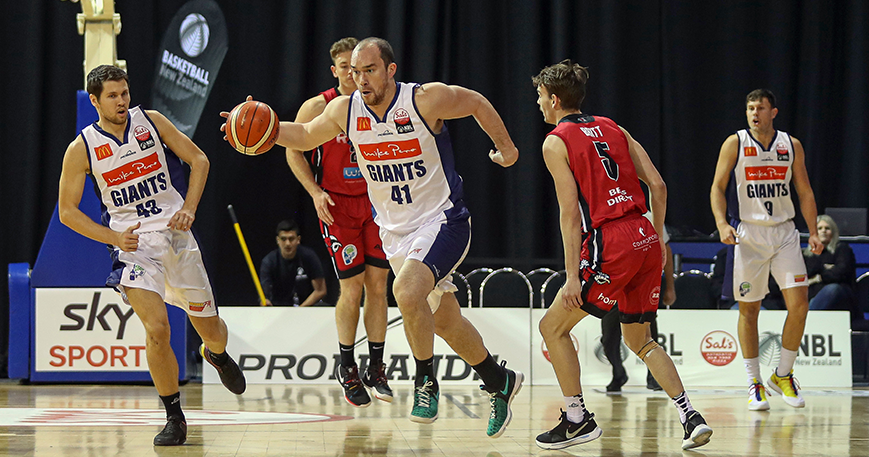 Giants get up to topple Rams

Nelson led by as many as 24 points at one stage and although the Rams showed commendable fighting spirit it was a game the aforementioned was always in control of.

Mike Karena, playing against his former club, was in dominant form for the Giants amassing 27 points, 11 rebounds and five assists. Also in good form were Tom Ingham (20 points) and Dane Brooks (16 points and seven rebounds), along with the experienced Josh Bloxham and Nic Trathen who notched double figures in scoring.

The result tightens up the NBL ladder with the top six teams separated by just a single win.

Early on, Ingham and Karena had got the Giants off to a flyer, opening with a 20-5 lead. Trathen was also in good touch, the Giants piling on 39 first-quarter points to lead by 17 points after ten minutes.

Ingham, the Nelson captain, and Bloxham kept the scoreboard moving for the impressive Giants who shot at 56% (23/41) from the field in the first half.

Webley was the best of the Rams at the interval with 10 points, but his team faced a huge challenge in the second half overhauling a 55-36 deficit.

An unusually quiet Taylor Britt made a couple of scores for the Rams but when Trathen scored in transition, from a Karena assist, Nelson was still twenty points to the good.

Tom Cowie’s three late in the quarter gave the Rams a glimmer of hope, but they still had a lot to-do trailing 75-63 at the three-quarter mark.

Karena moved into double-double territory but the Rams were hanging tough, a Talma tip-in meant the Rams were only nine points down with 7 minutes to play.

Karena was proving a tough proposition for the Rams but at the other end, Britt was finding his mojo – his six quick points meant the Giants lead was down to 8 points (88-80) midway through the last term.

Tysxun Aiolupotea and Theo Johnson made the next two scores and the Rams comeback effort was thwarted.

In other news, Tall Blacks star Mika Vukona will remain side-lined for the coming week at least in the Sal’s NBL after suffering from acute stomach pain that has led to tests for appendicitis.

The Giants number one draft pick had been going through on-court conditioning since being released from quarantine following his recent flight from Australia, however, a night of acute pain led to a test for appendicitis.

All basketball fans in New Zealand will be wishing Mika a speedy recovery.