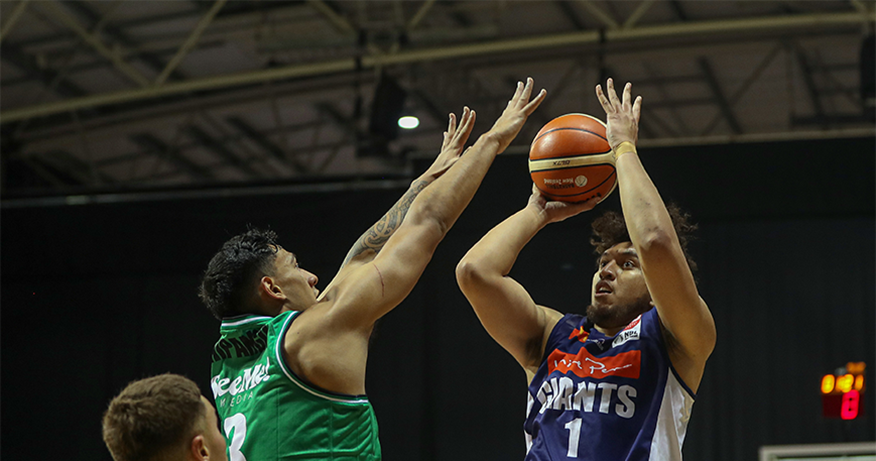 Giants go big to down Jets

In a hectic finish, the Mike Pero Nelson Giants hung on to claim a meritorious 87-83 win against the Property Brokers See Me Media Manawatu Jets in the second game on Sunday night.

Mika Vukona’s return is on hold until Tuesday, but the injury-hit Giants were able to welcome back big man Mike Karena and swingman Dane Brooks to their line-up for this encounter and their addition certainly paid dividends.

Karena was a force in the paint contributing 17 points and six rebounds, whilst Brooks showed nice touches with his seven points and five rebound outing.

However, the star of the show for the Giants was versatile swingman Theo Johnson with a game-high and career-best 20 points (7/14FG).

The Jets had manhandled the Auckland Huskies on Saturday night but found the Mike Pero Nelson Giants a completely different proposition. On numerous occasions, they threatened to take control of proceedings but in a game that had 14 lead changes, they were never able to assert full control.

The impressive Jayden Bezzant 17 (points) landed a three-point jump shot to make it a two-point game and when Karena fouled out with 2:56 to play it appeared the Giants' chances were slipping.

Hyrum Harris (18 points) and Tom Vodanovich (16 points) scored for the Jets in the closing two minutes, but a big three from Johnson with 43 seconds to play and free-throws from Brooks and Josh Bloxham sealed the deal for the Giants.

Earlier, Karena was quickly into the action scoring with his first two shots but it was the Jets in the ascendancy at quarter time 22-16.

Unfortunately for the Giants, Karena was forced to the bench early in the second quarter after picking up his third foul and with rookie centre Josh Leger picking up his fourth the Giants frontcourt stocks were being severely tested.

The Jets were unable to take full advantage but did lead 42-34 at the interval. Johnson (10 points) was the only player in double figures at that stage.

Another player incurring the wrath of the referees was Tom Vodanovich. The Jets hero from the night before, when he scored 38 points, picked up his fourth foul as Nelson drew level at 50 points apiece midway through the third quarter.

There was all to play for at three-quarter time with the Jets ahead by the narrowest of margins, 63-62. With five lead changes in the fourth frame, it was a game that could have gone either way but it was the Giants who went on to claim the victory.

The result leaves the Auckland Huskies as the only team without a win after the first full week of games.