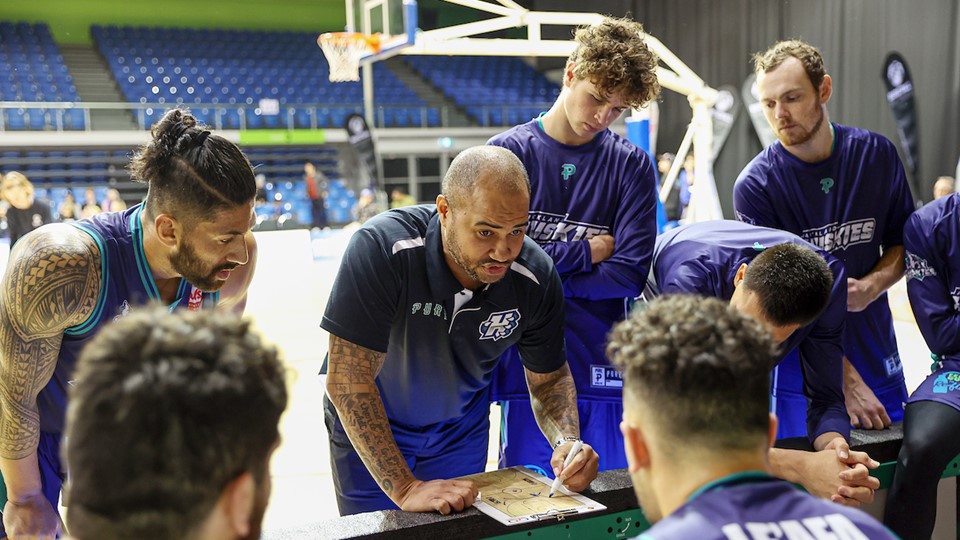 Huskies Bite Back And Bury Nuggets

The Auckland Huskies recorded their second win of the Sal’s NBL Showdown in the early game on Tuesday defeating the Fluid Recruitment Otago Nuggets 81-69.

Swingman Taine Murray led the way for the Huskies with 19 points (7/13FG) Tohi Smith-Milner had a double-double of 17 points and 10 rebounds. Izayah Mauriohooho-Le’afa won’t like his 6 turnovers but more than made up for those errors with 12 points, 6 rebounds, 3 assists and 6 steals. Leon Henry was also prominent with 11 points and 14 rebounds.

It was an off-night for the Nuggets but they were well served by Jordan Ngatai (19 points), Jordan Hunt (12 points) and Josh Aitcheson (10 points and 10 rebounds).

A lively opening quarter ended with the Huskies 23-18 to the good – Smith-Milner leading the way with 7 points.

Nate Wilson provided one of the highlights of the tournament to date in the opening ninety seconds of the second period. The Huskies forward seized on a loose possession and proceeded to throw the ball against the offensive glass before throwing down a two-handed dunk.

Akiva McBirney-Griffin wasn’t to be outdone, the young Nuggets centre throwing down a two-hander of his own to tie the scores (29-29). The dual between the two continued to entertain the good sized crowd that witnessed the Huskies take a 44-38 lead into the half-time break.

A Murray three took the Huskies out to a 13 points advantage early in the second half but the Nuggets soon closed to within six (45-51).

Another Huskies mini-run re-established the 13 points buffer and it was still ten at the three-quarter mark - the Huskies in sight of their second win of the season.

The Auckland club opened up the biggest lead of the game (67-51) on the back of a brace of threes from Smith-Milner.

Josh Aitcheson replied from deep and Ngatai converted an And-1 play – the Nuggets refusing to go away.

When Jordan Hunt reduced the Otago deficit to 72-65 with 4 minutes to play Huskies fans were getting twitchy, with Coach Kevin Braswell feeling the same way he called a timeout.

The Huskies move to 2-4 with the Nuggets slipping to 3-3 for the season.

Talking Points
1. How would the battle of the point guards work out – rising star Izayah Le’afa against the veteran Jarrod Kenny? Neither were at their absolute best but Le’afa shaded the contest on the night.
2. Could the Huskies, with the most impotent offence in the NBL averaging just 77.6 points per game, improve on that? They only managed 3 points more than their average but on the night their 39% bettered Otago’s 32%.
3. Young centre Jordan Hunt is travelling well averaging 14.8 points and 5.6 rebounds per game. Opposite number Tohi Smith-Milner has posted 12.2 points and 6.0 rebounds per outing. Who would win the battle of the big men? Hunt started well but the youngster appeared to run out of steam in the second half and it was the Tall Black finishing the stronger.