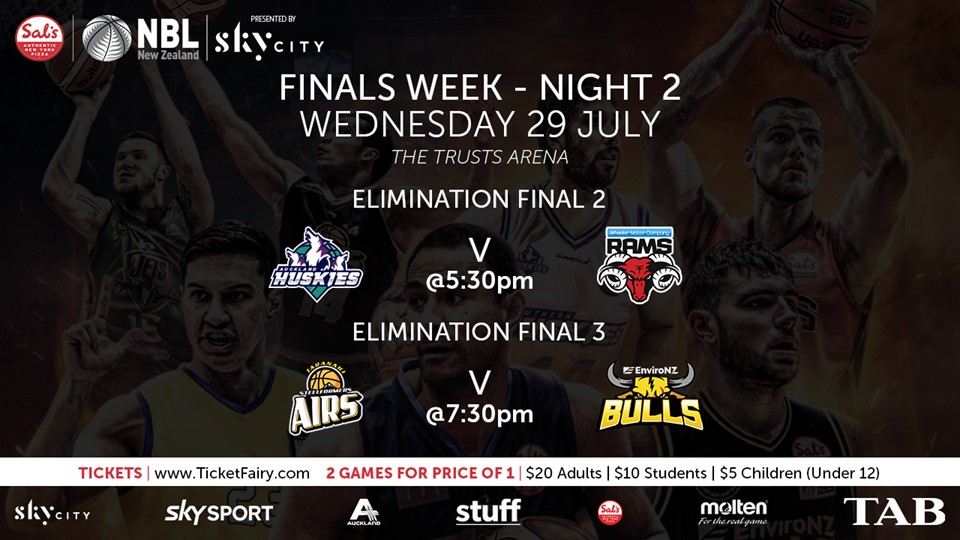 For the last five weeks the Sal's NBL Showdown has played out in front of live crowds, mostly filled with Aucklanders, but tonight the locals will put everything on the line as both the Auckland Huskies and EnviroNZ Franklin Bulls try and survive their first tests in Finals Week.

Tickets on sale at the door or pre-purchase HERE.

The Huskies and Bulls can win their respective way through to a Semi-Final tonight, but should they be on the wrong side of a result they could also be returning home to watch those same games on television like the rest of the nation.

The Rams won their way through to this game via a win over the Nelson Giants last night. The Rams come in with winning form, having claimed victory in their last two games, however they might be missing Alex Talma (injured) from this cut-throat game due to turning an ankle last night.

The Huskies have been inconsistent across the regular season, but when they turn it on they are capable of beating anyone. And, let's not forget, they did finish 3rd on the ladder and equal with the Jets in 2nd spot. The loss of Taine Murray (hand) was a blow, but they are here for a reason and they will like their chances against the young Rams.

This game has all the trademarks of being a classic offence (Airs) versus defence (Bulls) contest. If the Bulls are to win they have to find a way to keep either Derone Raukawa or Marcel Jones quiet. If they keep one, or even both, of Taranaki's star duo to under 15pts it will go a long way towards securing a win.

Isaac Davidson will also need to score at the other end for the Bulls, plus if Sam Timmins can add some points the boys from South Auckland will be in business. Dom Kelman-Poto will get his quota, so lock that in.

Broadcast: Both games will be broadcast live on SkySport 3 in New Zealand, on ESPN across the United States, and on NZNBLpass.com in all other countries.