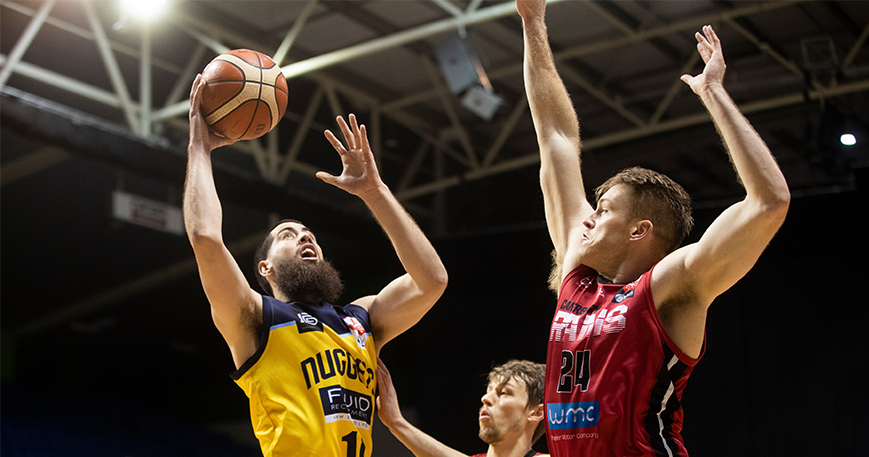 The Battle of the South went to the most southern team in the 2020 Sal’s NBL Showdown, with the Nuggets downing the Canterbury Rams 87-77 at Trusts Arena tonight, ending a two-game losing streak but confining the Rams to back to back losses.

The Nuggets turned a sluggish start into an impressive first half, leading at the first quarter break by 6 and then 14 at the main break, on the back of an effort that went deep into the roster.

Jordan Ngatai was a focal point for the Nuggets offence, getting plenty of looks and causing issues for the Rams every time he drove to the basket as the Tall Black forward went to the line six times in the first 20 minutes.

Matthew Bardsley was a spark off the bench, with 8 quick points on 4 of 5 shooting, while Kane Keil was also having a night in front of a passionate group of Otago supporters who had made the trip North. The big forward had 10 at the break in a sign of his growth.

For the Rams, they were often reliant on Taylor Britt driving to the hoop or Alex Talma finding room at the rim, with Britt stuffing the stat sheet at the half with 15 points, 3 rebounds and 5 assists in a typical high energy effort.

Both Mick Downer and Brent Matehaere were playing the long game in this one though, clearly limiting minutes for key players as the Sal’s NBL Showdown approaches the halfway mark, with Britt sitting for third quarter for the Rams and Jarrod Kenny noticeably excused from ball carrying duties as he played almost all of his 21 minutes at the 2-guard spot for the Nuggets, leaving the point largely to Benoit Hayman and Darcy Knox.

If the Nuggets thought they were going to win easy, the Rams brought them quickly out of that headspace with a stirring final quarter run that had them level at 72 with 4:44 left to play. Young Tom Webley was a key man in that charge, the big got busy in the paint and with Britt back on the floor the win was on for the Rams.

But Otago steadied the ship and on the back of a couple of dagger threes from Keil and a brilliant triple from Richie Rodger that saw every Nugget getting their hands on the ball, the team in gold edged away to win comfortably, much to the delight of their noisy travelling supporters.