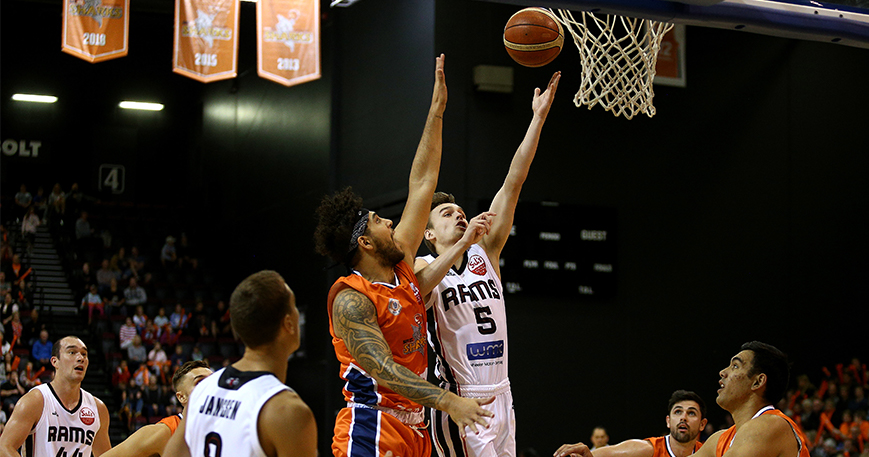 The Wheeler Motor Company Canterbury Rams put on a show at Horncastle arena tonight, handing the Southland Sharks an 89-75 loss.

The Rams were the first on the scoreboard thanks to a free-throw from Mike Karena, but the game was played at a very slow pace in the opening 10 minutes. All ten starters chimed in with points for their teams, however, none of them were able to get anything going. The hosts scoring from the perimeter gave them a narrow 18-15 lead at the break.

A pep talk from Mick Downer saw the Rams come out the more aggressive team in the second, going on 13-4 to start the period. The damage would be done from outside, with four different players in red singlet putting the ball through the hoop from beyond the arc.

Meanwhile, the Sharks just couldn't get their shots to fall and committed far too many errors. The contrasting play extended the Rams lead to 13 at the half, 43-30.

Defence was going to be the key if the Sharks wanted to get back into the game and with that, they upped the intensity. Points that came far too easy in the first half weren't available for the Rams in the third period and the momentum from that end would carry over to the other end for the visitors.

Alex Pledger continued to be a presence inside, while Dominique Kelman-Poto and Tom Vodanovich chipped in with points in the paint and from the line. The Sharks won the quarter 23-19 and cut the deficit to nine (62-53) going into the fourth.

The Sharks started the final quarter strong, but from the eight-minute mark, it was all the home team. Triples from Luke Aston and Cam Gliddon pushed the Rams out to a game-high 19-point buffer midway through the fourth and that would be the game. As a champion team does, the Sharks never gave up and moved into a full court press to try to flip the script, but it was all too little too late. Final score 89-75, Rams.

Taylor Britt was the MVP with 14 points off and stellar defence off the pine. Karena was the joint top-scorer with 16 points and Tony Tolovae was a worthy contributor with 15 and six.

Pledger was the pick of the bunch for the Sharks with 16 and 9, but Kelman-Poto was a close second with the exact same stats. An absence of dominance from Jarrad Weeks was a big takeaway from tonight, the guard scored 11 points but did so on 25% shooting. Expect him and his team to bounce back in Sunday's game against the Cigna Wellington Saints.