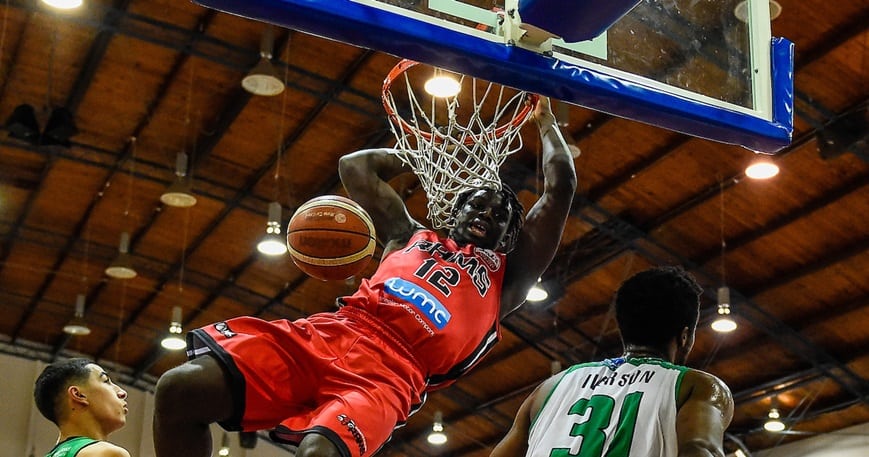 Rams survive in double overtime thriller against the Jets

The Wheeler Motor Canterbury Rams have kept their playoff hopes alive, but have had to grind it out in double overtime, defeating the Go Media Jets 106-103.

The previous game between the two had also gone past regulation, the Jets winning in overtime thanks to the play of Daishon Knight who before tonight was averaging 33.5 points against Rams.

It was much the same for Knight would again cause the Rams headaches, scoring 47 points which was scored in a myriad of ways from mid-range jumpers, three pointers (6-10 3pt), and penetrating to the hoop and drawing fouls where he would convert on 13 of 16 free throws.

But Knights’ heroics would fall just short as the Rams were able to hold on to end their four game losing streak and move to 8-8. Winston Shepard tallied a second straight triple-double of 18 points, 13 rebounds and 11 assists, and Michael Karena had a double-double of 27 points and 10 rebounds.

Tonight was a war of attrition as both teams would have their fair share of opportunities to claim the win. In double overtime the Jets held an early four point lead, but a key play would occur with 2:03 left when both the Jets and Rams fought for a loose ball which would end up being called a foul on Kuran Iverson which would be his fifth. Iverson would foul out with a double-double of 23 points and 21 rebounds.

Without Iverson the Rams would capitalise and take the lead thanks to forward, Max Darling, would come out of nowhere for the put back jam which would be a three point play. The Rams would push their lead to 102-97 thanks to a deep three from Ray Cowles at the top of the key.

But the Jets, in particular Knight would not give in, draining back to back three’s with under 20 seconds to go to put the visitors within one. The Jets would foul Julian Williams-Washburn with 6.9 seconds left, and he would slot both to make it a three point ball game.

On the final possession, Knight was able to break away from Cowels to get a relatively good look for the game tying three, but it was not to be as the gutsy Jets drop to 2-13.

Other notable efforts tonight were from the younger local players such as Jets guard, Haize Walker, who would add 12 points and Rams forward, Darling, who had 16. Coach, Mark Dickel, moved Darling to the bench and he responded with energy on both sides of the court, but notably the offensive glass where he would have multiple thunderous put back dunks which shifted the momentum.

After playing the night before in the Hawkes Bay, the Rams will now have the rest of the round off, their next game will be on the road to the SIT Zerofees Sharks in a weeks’ time.

The Jets return home where they will host the Sharks this coming Sunday.