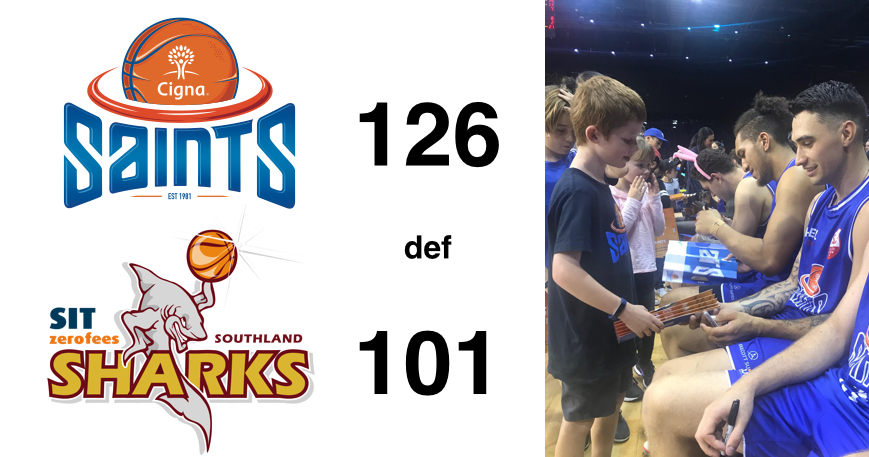 Though just 12pts in total has separated the Wellington Saints and Southland Sharks over their last 15 meetings, the past counted for little on ANZAC Day when the hometown Saints blew past the visiting Sharks in a 126-101 rout.

Played in front of another big 3,500-plus crowd, the points flowed freely amid a plethora of highlights as last season's grand finalists went toe-to-toe in 2019's most anticipated match-up thus far.

In a basket-for-basket opening period the Sharks went into the first break up 27-26 on the back of some hot shooting by Jarrad Weeks, while for the Saints the scoring tempo was set by Rob Loe.

An incident midway through the first term involving Tom Vodanovich and Rob Loe may be scrutinised by the league after both players fell to the floor and tangled heavily, the contact between them raising the ire of the Saints as the raw passion and fierceness that exists between the two teams came boiling to the top.

As the second term progressed the Saints started to get on top with Loe, Shea Ili and Nick Kay leading the way, at times pushing the lead into double digits. A trey on the buzzer by Mitch McCarron closed the gap to 5pts and offered some hope to the Sharks as they left the court for the long break.

As the third period started there were renewed hopes that another thriller was on the cards, however the Saints wasted little time in putting the foot on the gas once more with Reuben Te Rangi starting to find his stroke and Sunday Dech entering the fray midway through to deliver a barrage of quality baskets.

The 36-21 quarter was telling, the Saints breaking the spirit of the Sharks in a dominant patch.

By the time the fourth quarter started the home team had opened a 99-79 lead and the final 10-miutes of play became somewhat of a celebrating for the Wellington fans, and in true rivalry fashion they enjoyed every second of it.

For the Sharks, Jarrad Weeks (21pts, 3 treys, 5ast) did all he could to lift his team, Dom Kelman-Poto (27pts @ 80%) kept the scoreboard ticking over, while Tom Vodanovich helped himself to 14pts.

The barnstorming victory places the Saints as clear favourites for this season's Sal's NBL title, while the Sharks will no doubt head home and dissect a contest that saw their arch rivals deliver a heavy first-up blow.