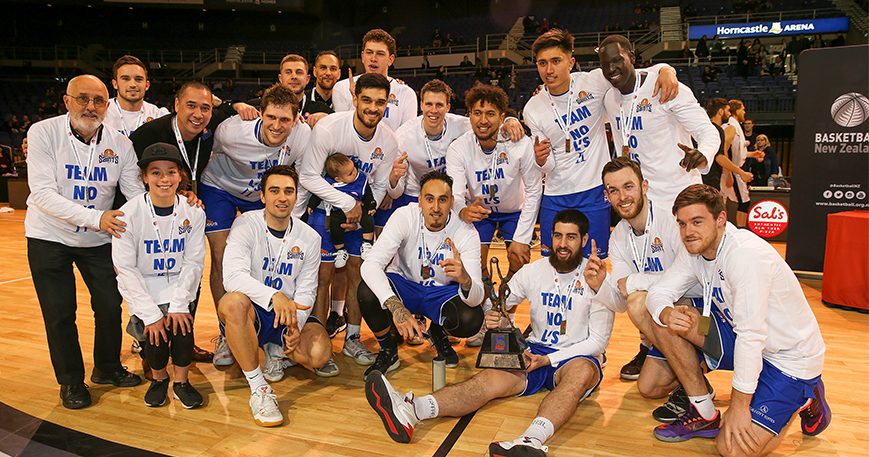 Saints come from behind to finish 2019 undefeated

The Cigna Wellington Saints completed their second perfect season in the Sal's NBL, beating the Taylor Bay Hawks 78-68 after trailing by that same winning margin going into the fourth.

The Hawks started the game with a hiss and a roar, scoring the game's first five points through Ethan Rusbatch and Dion Prewster. A fast start was followed by close to three minutes worth of bucketless basketball, but this was made up for with 9-2 run from Hawks to close out the first quarter. They went into the second up 21-10.

Finding the bottom of the net troubled the Saints for nearly all of the first quarter and the pre-game favourites just couldn't shake their funk. They shot 30% from the field in the opening half and turned the ball over 10 times. Only Tom Abercrombie sniffed double-digits points with nine and he was the only Saint to shoot better than 33%.

Meanwhile, Rusbatch kept putting it on for his hometown and had 14 points by the quarter's end. He along with Brandon Bowman gave the Hawks a 16-point advantage going into the break. The import filled the box score in the first 20 minutes with 10, 6 and 5. Time expired on an Abercrombie layup, cutting the Hawks lead to 16 going into the half.

Big minutes for the Hawks starters was always going to lead to early fatigue, but to their credit it didn't become apparent until late in the piece. Their lead stayed in double-digits right up until the eight-second mark, when Abercrombie popped up once again for three.

Less than half a quarter earlier the Bowman and Rusbatch show was in full swing, with the pair scoring 15 of their team's 18 points in the period. An 11-0 run by the Saints, featuring four different players, pulled them back to within 10 with just as many minutes left in the game.

Eleven straight points in the fourth put the Wellingtonians in front for the first time in the ball game, erasing what was once a 21-point deficit to a then one-point lead. Bowman answered with a trey from the wing, only for the man of the match Abercrombie to reply with three of his own.

The sixth man's shot led to a 12-0 run, stretching their lead out to 10 with just under three to go in the contest. Two successive threes for Bowman kept the closing moments interesting but just as they've done all year, the Saints showed up when it mattered most.

It was remarkable finish to what has been an outstanding year for the Saints and they showed real backbone to comeback from what many teams would've seen as insurmountable. Credit must be given to Hawks for their performances both tonight and across the season. They worked their way around several roadblocks this season and just didn't quite have enough gas in the tank to get themselves home.

Stats That Matter - Basketball can appear to be a one-man game at times, but more times than not it's the team that trumps the individual. The Saints rotation runs eight deep and tonight their bench delivered 24 points. In contrast, the Hawks got zilch outside of their starters.