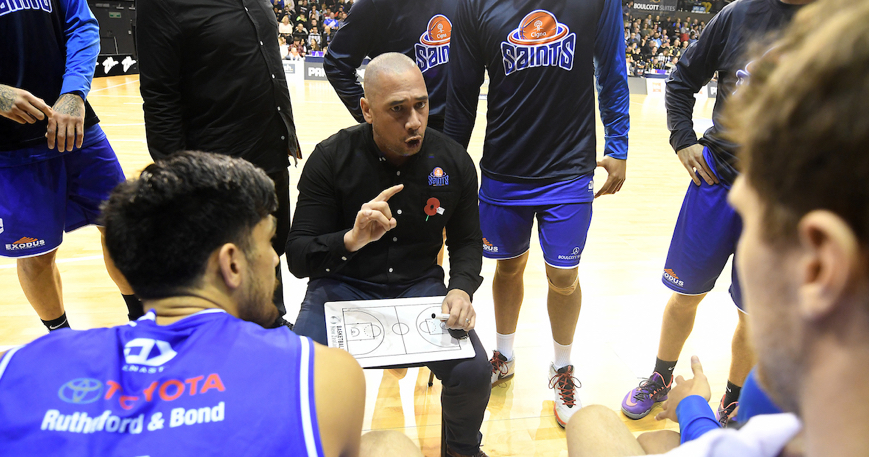 Saints Do Enough To Edge Past Plucky Airs

There was nothing pretty about it, but in the end a win is a win and in the case of the Wellington Saints it was an 11th straight victory, albeit a far harder outing than they may have thought going in.

With no Derone Raukawa or Alonzo Burton, just one import and a motley crew of players ready to soak up all the available minutes they could get, the Taranaki Mountainairs pushed their more highly touted opponents to the edge.

Added to the absences, lone import Chris Early had more turnovers (5) than he did points (4).

To think the Saints would only get seven players onto the floor against an opponent with just two wins to show for the season could not have been predicted, but this game wasn't like many others the Saints have played at home so far this season.

In fact when you consider home wins have already come against the Hawks (27pts), Huskies (27pts), Sharks (24pts), Rangers (33pts) and Giants (11pts), nobody could have predicted the Airs (9pts) would get within single digits.

Such was the Plucky performance of the Airs they led at one stage by 8pts and also managed a 10-0 run at one stage. The seven players they faced were none less than Shea Ili, Jordan Ngatai, Rob Loe, Tom Abercrombie, Nick Kay, Reuben Te Rangi and Leon Henry.

That's a group that features a Boomers player and six Tall Blacks.

Dane Brooks proved to be the star on the night, the Airs jumping-jack guard dropped 23pts @ 90% on the star-studded Saints, and also helped himself to 8rbs, 2ast, 2stl, 3blks and 2 treys.

For the second week running the Saints struggled with their shooting, going at a below par 41% from the field and a horrible 18% (5/27) from beyond the arc.

The biggest difference in the game proved to be Taranaki's poor ball use, the visitors succumbing to 21 turnovers, which allowed the Saints to 24pts off those blemishes. You can't give the best team in the league those sorts of opportunities and expect to come out on top.

The Airs won two quarters and led by 2pts at the half. They shot better and got more points off the bench. It was a terrific performance that delivered them plenty of accolades, yet unfortunately there was no win to show for the effort.

The Saints move on, but deep in their mind will be the fact they are in a bit of a shooting slump right now. How long will it last? Probably not as long as a few opponents would be hoping for.

Stats That Matter - for the second game in a row the Saints failed from range, a worrying sign. A return of 5/27 at 18% was way below their best.