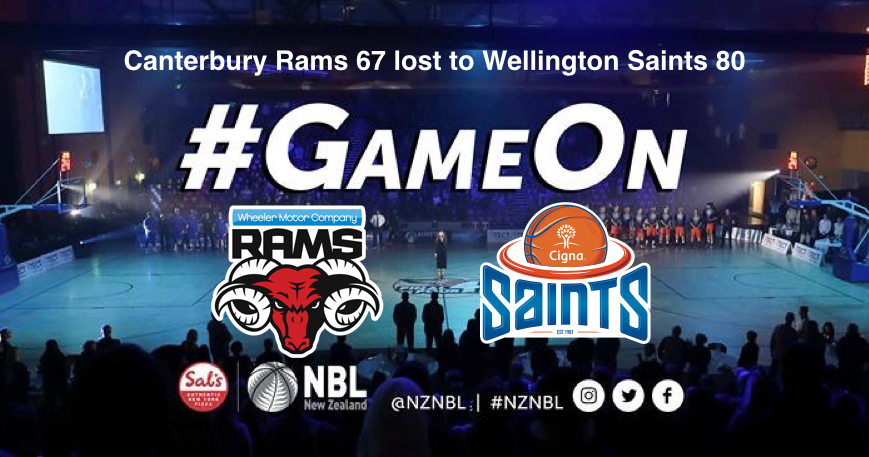 The Wellington Saints remain the only unbeaten team in the Sal's NBL and after just four games they sit two wins clear atop the league ladder, boasting wins over the Sharks and Rams in Round 3 action.

After toppling the Sharks by 25-points on ANZAC Day, the Saints visited Horncastle Arena in Christchurch to take on the Rams Saturday night and yet again they mastered a win off the back of another blistering start.

In front of 4,120 fans the Rams looked set for a big showing after two strong wins on the road last week, but a 30-12 start by the visitors soon quietened the audience.

By half-time the advantage had blown out to 26-points with the Saints looking better at both ends of the floor.

Disappointingly for the Rams they just couldn't get their run going as the Saints constantly pushed them out of their usually productive offensive sets.

With the crowd looking for something to spark them up, the Rams returned to the court after the long break and started to land some shots,  something that had been missing in a first half that yielded just 23 points.

A 26-15 third period for the Rams restored some belief, and when they reduced the margin into single digits early in the fourth period there was a real sense of hope that a miracle comeback might occur.

However, showing the poise you would expect from an experienced outfit, the Saints steadied quickly and closed the game out to win 80-67.

In what was a tale of two halves, the Saints won the first half 49-23, while the Rams were the better in the second half scoring 44-31.

Star of the night was Leon Henry (20pts), who came off the bench for the Saints and landed six triples in a shooting masterclass.

Rob Loe completed a great round with 13pts & 8rbs, while Shea Ili dished out 9ast.