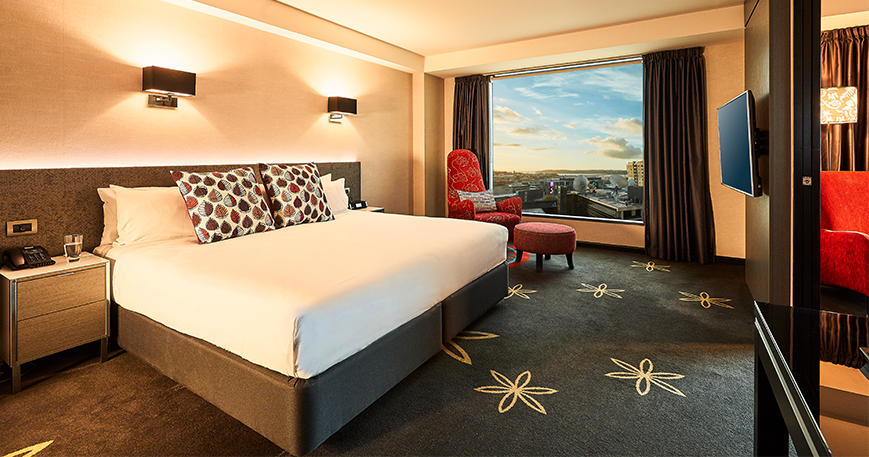 SkyCity Hotel has opened its doors to over 80 of the country’s best basketball players today, as the seven clubs competing in the Sal’s NBL Showdown look to settle in before next Tuesday’s tip off.

Over the next six weeks, teams will be travelling back and forth from Auckland’s city centre to The Trusts Arena to see which club is crowned the nation’s best in 2020.

Early departures and late arrivals are nothing new to the hotel industry, but catering to high-performing athletes for over 30 consecutive days isn’t.

Otago Nuggets General Manager Angela Ruske says she and her franchise are grateful for the work being done to ensure smooth sailing for all the parties involved in the competition.

“It’s no secret that putting together a league takes a lot of time and input, but I’ve personally been blown away at the work that has been put in to ensure we get the NBL running this year.

“So much has been done in such a short amount of time, and the fact the team are staying at SkyCity and playing at [The] Trusts Arena speaks volumes of the diligence of all the organisers and staff.

“We couldn’t have asked for anything more this year and now we can enjoy watching some great basketball,” says Ruske.

The EnviroNZ Franklin Bulls and Auckland Huskies hadn’t had to journey too far to check themselves in for their stay at SkyCity, whereas teams like the Nuggets, Wheeler Motor Company Canterbury Rams and Mike Pero Nelson Giants have touched down in the City of Sails after flying from their South Island bases.

A key figure not travelling through the air is Giants Head Coach Mike Fitchett, who instead drove from one end of the North Island to the other in his team’s sponsored car.

The Tall Blacks Assistant Coach joined his players and support staff at the hotel this afternoon and says there was no rush to get to a court once bags were dropped.

“There’s a lot of basketball to be played over the coming weeks and so I’m looking to build our guys into it and set out our expectations before getting any shots up.

“As a team, we’re in a good space. The guys have been training together the past couple of weeks and we even had Josh Bloxham fly himself down to get familiar with the group.

“We’re feeling good and collectively we know it’s going to be a grind, but we wouldn’t be here if we didn’t want to take it on,” says Fitchett.

Training sessions will take place from tomorrow morning, with each club set to go through their final stages of preparation before showtime tipping off at 5:30pm, Tuesday next week. A Saturday morning mihi whakatau has also been organised to bless the six-week-long campaign.

Sal’s NBL General Manager Justin Nelson says he is looking forward to tomorrow’s serenade, which in a way closes one door and opens another.

“While the Sal’s NBL Showdown doesn’t start until next Tuesday, tomorrow’s mihi whakatau will really be the opening of our season.

“A mountain of work and determination has been put in to get this ground-breaking event organised and none of it would be possible without the support of the staff around me and our partners.

“Getting all the teams to Auckland was a massive checkpoint, we’ve done that, and now we can turn all of our focus to what’s happening over the next six weeks.”

The first game of the Sal’s NBL Showdown sees the Taranaki Steelformers Mountainairs play the Giants on Tuesday at 5:30pm, before the Rams take on the Huskies at 7:30pm.