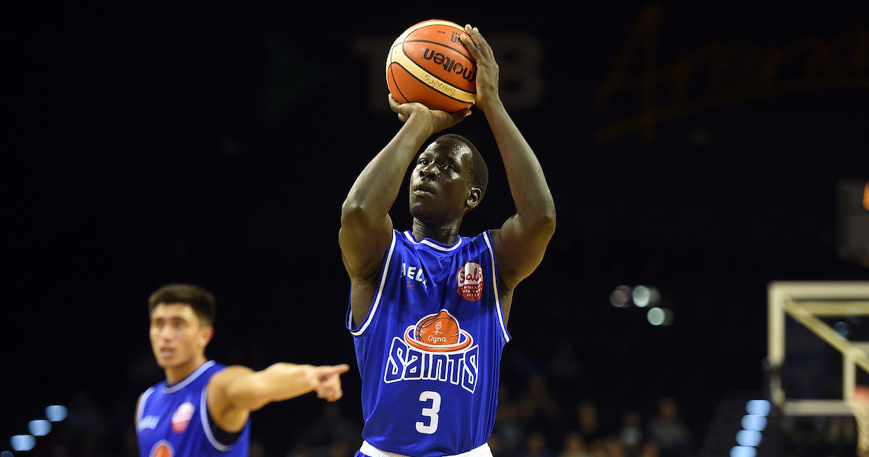 The Cigna Wellington Saints needed a big second half to stay on their crusade, but got the job done with 101-78 win over the Taranaki Steelformers Mountainairs.

A slow start for the league leaders saw them trail early in the first. Derone Raukawa led the way for the hosts, scoring and distributing his team to a 11-8 lead.

The Saints clicked into gear not long after the five-minute mark and broke the game open with a number of easy twos. The would hold the lead til quarter-time and finished ahead 24-17.

There was very little difference in visitor’s play to start the second, who held the advantage for nearly half the period.

This changed after Raukawa sliced his way inside layup, sparking a 9-0 run for the Airs to regain the lead and go up 43-42 at the break.

One would imagine Paul Henare delivered a stern half time speech, as it was Saints who came out of the interval the aggressor.

Jordan Ngatai and Nick Kay made their opposites pay for their lacklustre defence, scoring in a variety of ways to give their team a double-digit lead.

Alonzo Burton and Raukawa kept the Airs in the fight with some late triples, but their team trailed 73-65 going into the final quarter.

It’s always a tough ask coming from behind against the Saints and yet again they proved too strong.

Ngatai got the ball rolling and they never looked back, with Rob Loe and Sunday Dech piling on the points until Henare got the bench involved.

The Airs will be proud of the way they battled for 30 of the 40 minutes, but they were added to the list to of the Saints’ second half comeback victims.

It’s difficult to tell if the Saints are really being tested, with a Final 4 place safely secured. They will definitely want to finish the regular season undefeated and are only a handful of games away from doing so.