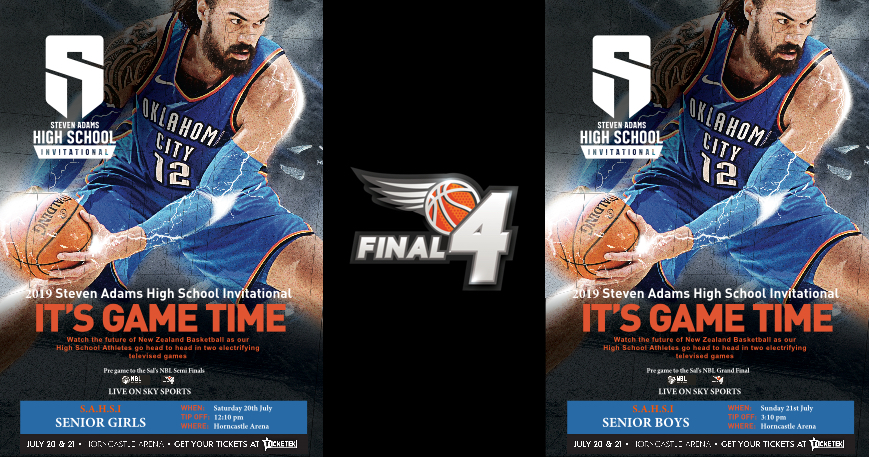 Steven Adams and the Sports Pathways Trust are bringing the Steven Adams High School Invitational Games to Christchurch’s Horncastle Arena on July 20/21 where both the girls and boys games will be televised live on SKY Sports.

The Steven Adams High School Invitational will bring together 40 of New Zealand’s most talented senior male and female High School basketballers, all of whom are invited by Steven Adams to a week-long camp highlighted by the games at the Sal’s NBL Final 4.

Throughout the high performance camp the players will be working with some of New Zealand’s leading coaches and mentors including Steven Adams.  The first camp was held last year in Manawatu and this year the camp has been extended to a week with the conclusion of the camp being the boys & girls invitational games played at the Sals NBL Final 4.

“We are very excited to announce these two exciting games will be played at the Final 4 at Horncastle Arena,” said NBL General Manager Justin Nelson.

“The opportunity to show the best emerging basketball talent together with the biggest games of the Sal’s NBL season is another wonderful opportunity for the fans.”  Nelson added.

"We look forward to working with Steven, who will be in attendance at the event.” Nelson added.

The Steven Adams High School Invitational games and Sal's NBL Final 4 weekend has been made possible through the partnership between Sports Pathways, Canterbury Rams and the New Zealand National Basketball League.

“The Final 4 will now feature five games with all of them televised live on SKY Sports. The three NBL games will also be televised live on Prime TV,” Nelson explained, adding “We will get to see some of basketball’s very best players in the Sal’s NBL and with the Steven Adams High School Invitation Games we will also enjoy watching some of the very best emerging talent in girls and boys basketball.”