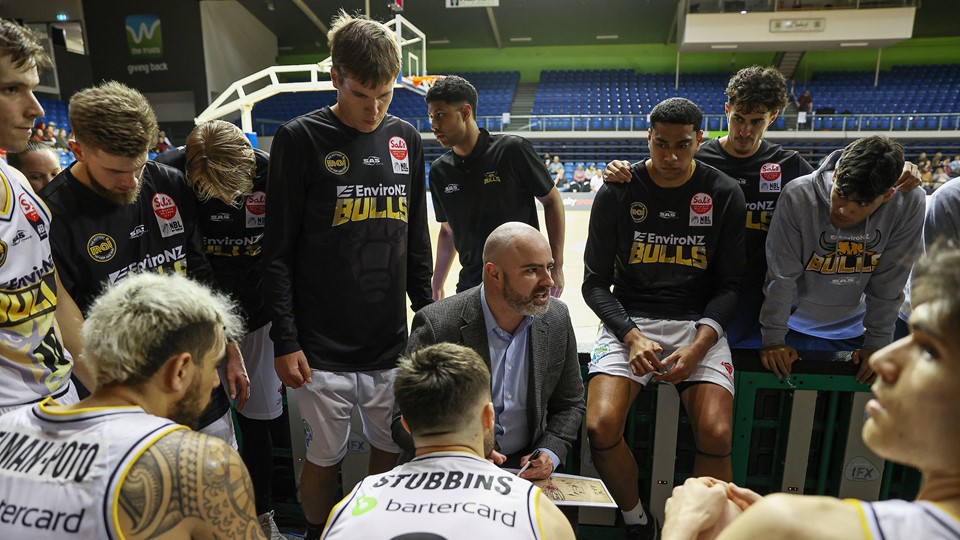 Teams And Players Enjoying A Home Away From Home

Tonight's two games in the 2020 Sal's NBL Showdown mark the halfway point of the season, a six-week stretch like nothing the teams or players have ever seen before in New Zealand's National Basketball League.

Tonight's games between the Nuggets and Jets, followed by the Airs and Rams, is event night 14 out of 28 that make up the battle for this year's title.

Based around a unique player a draft, a first for the League, and the 'hub' concept we are seeing other sports across the world adopt, including the NBA and WNBA in the United States, which was first touted by the NZNBL back in late March, the competition has received positive reviews, especially from those directly involved.

For EnviroNZ Franklin Bulls coach Liam Simmons the model and how it has been rolled out has impressed him greatly.

"This has been no small feat by the League and teams to bring this many people together under the one roof and to have the level of service from SkyCity, and other partners, and the commitment from the League to manage schedules, training, eating, physios and so many other things …. it has been very impressive," said Coach Simmons.

"The opportunity for players to stay in Auckland at one of the nicest establishments in the heart of the city is a gift, and something they will all look back on and still be talking about in 10 years time.

"We are so fortunate to be able to play basketball right now, and even more fortunate to have people care about the game like the NBL, Basketball New Zealand and all the staff. It truly has created a platform for all of our players that they would not have had.

"Everyone right now is talking about Davidson, Timmins, Bezzant, Hunt, Le'afa and so many other young players, it really has been a great opportunity for the players and you can see that in the way they are going about preparing and playing," added Simmons.

One of the competition's brightest young stars is Bulls guard Isaac Davidson. Back from US college and thrust into his first season on home soil, he's loving every minute of it.

"I just feel really lucky for all of us, just the fact we can be playing basketball right now given everything else that is going on," said Davidson.

"Being around my friends, the guys I played basketball with before I went  to the United States, to see them every day around the hotel, at dinner, it's great to be back with them. And also to be playing in front of my family and friends, even if I'm a bit down I just think about what I do have and I feel very lucky right now."

The amount of work that has gone into putting the season on isn't lost on one of New Zealand's brightest young stars either.

"The work the League has done, everything is there for us. We are really well fed, the accommodation is great, a clean room every day, the support staff, just everything. I'm really thankful for the opportunity and what everyone has done to make this happen for us," added Davidson.

The number one pick in the Player Draft was Jordan Ngatai, a seasoned traveller with the Tall Blacks and one of this season's most senior players. Like those around him, he is enjoying the environment and the way all the players have come together.

"It's been good, getting to know a different group of guys has been really fun. We get along very well," said Ngatai, adding "The accommodation has been really solid, the environment is good fun and although this season has been different, we're all really enjoying it."

For Sal's NBL General Manager Justin Nelson the first half of the competition has delivered lots of positives, but it's the environment the teams and players are experiencing that sits best with him.

"For us the key things we wanted to get right for the players was where they sleep, what they were eating and the stadium they trained and played at, backed by enough support to ensure they can prepare and recover at a level that helps them be the best they can be over a robust and really intense six-week period," said Nelson.

"So far so good. The environment is great, all the staff have worked tirelessly, we have certainly set the bar high, which I'm very pleased about.

"When it comes to eating and sleeping the players are being looked after to an extremely high level, the support shown by SkyCity has been incredible, just amazing. And then the army of physios and massage therapists have also done an amazing job, so I'm very thankful to them for their ongoing support and commitment to helping us put the show on," added Nelson.