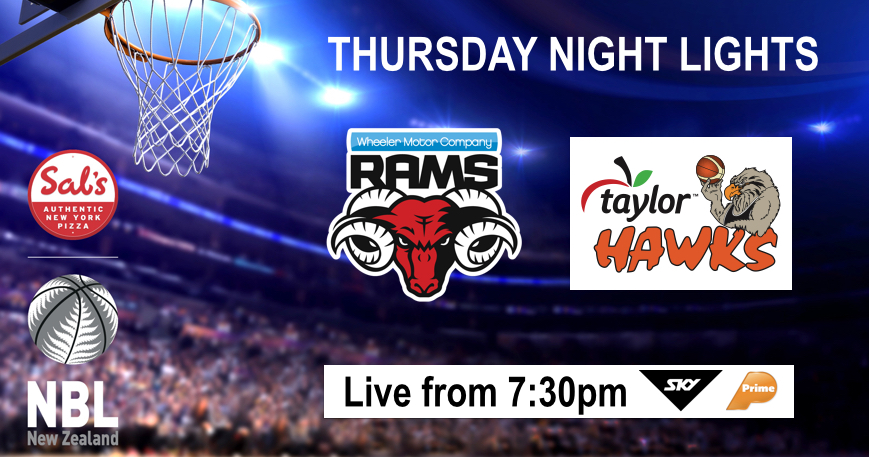 Thursday Night Lights – 10 Things About The Rams vs Hawks

Catch all of Thursday night's action (7:35pm tip-off) live from Cowles Arena on SKY TV and Prime TV from 7:30pm.

The Hawks are 3-1 and the Rams are 2-2 with a lot riding on their Thursday night showdown to start the fourth round of the Sal’s NBL season. Here’s 10 things you need to know about Thursday Night Lights.

1. Angus Brandt - the big inclusion for the Hawks last week wasted little time stamping his authority on the Taranaki Mountainairs with an imposing 18pts & 12rbs double-double. With Daniel Kickert expected to be sidelined for a couple more weeks, Brandt will be primed and ready to go in a tough match-up for the Rams.

2. Running Game - the Rams are at their best when they can get out and run and the visiting Saints took that away from them last week, a ploy that set the title favourites up for a good win and no doubt provided the Hawks with a glimpse of what game plan to roll with.

3. Singing Loudly - one of the best imports over the first few rounds has been EJ Singler. The scoring forward is making his presence felt and is currently leading the TAB MVP leaderboard.

4. Naar vs Kenny - another dynamic PG showdown with Emmett Naar and Jarrod Kenny going head-to-head, it promises to be a ripper!

5. The Hot Hand - Ethan Rusbatch is on fire from deep and the Rams will need to work out a way to limit him. Over his first four games Rusbatch (a local down Christchurch way) has landed 22 treys at 66.7% and is the league’s most dangerous long-range shooter right now.

6. Defensive Force - for the Rams to win, another huge defensive task will fall on the shoulders of Isaiah Wilkins, who has already established himself as a frontrunner for Defensive Player of the Year. It remains to be seen who Wilkins will go to, but you can be assured it will be the most important match-up of the night.

7. Rams Faithful - even though they struggled early in last week’s game against the Saints, the Rams faithful fans packed Horncastle Arena (4,120) and made plenty of noise. At the smaller Cowles Stadium, if the Rams fans can fill the place and bring that same energy the Hawks may find it to be very hostile territory.

8. Cam Gliddon - in his 3 games so far Gliddon has thrown down 10 triples at 45.5%, but with the open looks he’s getting you just feel like he’s about to deliver a massive game. Will this be the one?

9. Live TV - for the first time this season these two teams will go into battle live on SKY TV and Prime TV, beamed into the lounge rooms right across the country. Whoever holds their nerve may just help get their team off to a match-winning start.

10. Early Season Crunch - the race for the top four already looks like it will be red-hot and other than the unbeaten Saints, it is a wide-open dash for the Final 4. It might only be R4, but this game is a vital one for both the Rams and Hawks as they look to place themselves atop Wellington’s chasing pack.

A quick turnaround for both teams, especially the Hawks after their trip to Taranaki on Sunday. The visitors have started well with a 3-1 record and currently sit second on the ladder, while the Rams are 2-2 with wins against the Rangers and Airs, but losses to the Sharks and Saints. This is a big test for both teams, especially the Rams after an inconsistent performance in front of a big crowd last round. Cam Gladden and Emmett Naar will be keen to step it up here and lead from the front for the Rams, their importance to the team cannot be understated. For the Hawks, Angus Brandt slides into the starting unit and no doubt will give the Rams a few headaches. A successful partnership with EJ Singler and Ethan Rusbatch will go a long way to giving the Hawks every chance here. As far as match-ups go, look for Naar and Jarrod Kenny to push each other, while Isaiah Wilkins will probably get Singler in a fantastic showdown.

From The Coach – Mick Downer
After a spirited fightback in the second half against the Saints we take some momentum in against the Hawks. Our learnings from last game is that we are a better team when we play on the front foot and aggressively at both ends. We will aim to do this against a very talented Hawks side led by veteran guard Jarrod Kenny, local player Ethan Rusbatch and a trio of imports who are all very good players. The crowd will be blessed with seeing significant talent for both teams, be it in the paint, guard play or on the wings. There are a lot similarities between both rosters.

From The Coach – Zico Coronel
This week’s game at our home away from home - thanks to Ethan Rusbatch being from Christchurch - represents another opportunity for us to grow as individuals and as a team. The scouting of teams was evident in Round 3 and now the challenge is for teams to be adaptable and to have counter tactics. The Rams are organised, big, and deep and present us with a great learning opportunity and challenge.