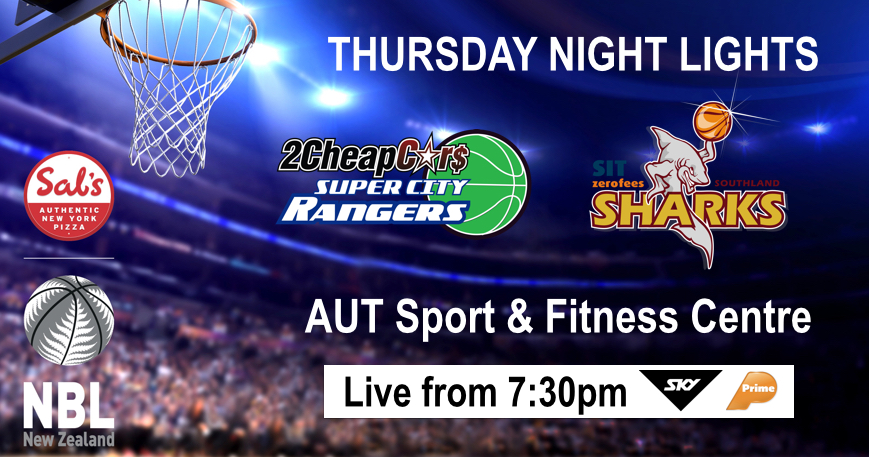 Thursday Night Lights is set to deliver plenty of highlights with the Supercity Rangers hosting the Southland Sharks in a must-win encounter for the visitors. With Tim Quarterman (Rangers) going at nearly 40pts per game over his last five outings, it won't be an easy night for the Sharks. Here's everything you need to know about another great Sal's NBL match-up.

Venue Change: note that this game will now be played at AUT Sport & Fitness Centre, Northcote.

Game Preview
A must-win game for the Sharks if they’re to keep their playoff hopes alive. The fourth-placed Sharks have played two more games than the fifth-placed Huskies and a loss for the aforementioned would give the Tasmanians the opportunity to draw even in the wins column.  Todd Blanchfield and Jarrad Weeks both put in shifts last Thursday, but it wasn’t enough to take down the soaring Hawks. If the pair fails to fire the ramifications could be disastrous. As for the Rangers, they have been a one-man band as of late, with Tim Quarterman averaging 37 points, 7 rebounds, 4 assists and 3.5 steals over his last five outings. If the former Trailblazer is to receive some assistance on Thursday night from Venky Jois and co, an upset might well be on the cards. They do, however, play the Huskies three days later, where if they manage to win both it would brighten an otherwise gloomy weekend for their South Island foe.

From The Coach – Jeff Green
After a positive display on the weekend versus the Hawks I am encouraged that our young team is accepting the challenge to execute on both ends of the court for 40 mins, not 25. The sharks have hit a rough patch of late but I am under no illusion they will be ready for us. The game will be intense with both teams being in the spotlight for a nationally televised encounter.

From The Coach - Judd Flavell
This week we have worked to re-establish what we want to do and emphasise our team identity. Rangers three imports look like they carry a huge scoring load . When Quarterman has the green light he has shown he is going to be a real challenge – we won’t be able to rely on one guy defensively - it’s going to have to be by committee.